Living through the Coronavirus: Part 2

Editor’s note: This is the second in a two-part series. The first part appeared in the April 8 edition of the Tri-City Times. Columnist Paula Parisot is sharing the experiences of her relative, Morgan Gallup Zhu, who resides with her husband and daughter in Nanjing, China, during the recent coronavirus outbreak in that country.

Around March 13, (7 weeks into the lockdown), cities like hers with zero new cases for a few weeks started to lighten up restrictions and she began taking her daughter out to play for an hour or two every day. Restaurants, malls and public places slowly started reopening, but restrictions remained like dining at least 6 feet apart from other people and always wearing masks in public. Many places also recorded your name when you entered. If you had been in the city for 14 days, then you could get a QR code on your phone that you could show to enter places.

China announced on March 20 that local schools would reopen April 8 if new cases remained at zero, she wrote in her blog.

Here is a sample journal entry from her blog, An American in China:

March 21: Guys, China didn’t just do “social distancing” to get this virus under control. I just watched a CBS video that said China was doing social distancing, but it went a lot further than that in most cities. Chinese people locked themselves in their homes. People were not going out for walks, jogs or to the parks at any time. Everything was completely empty and quiet. When people went to the grocery store, they wore masks and gloves. Some people even wore protective eye gear and ponchos. Many people disinfected everything that came through the front door of their homes. Lombardy in Italy, the area hit hardest by the virus, closed parks on Friday, March 20th and told people not to jog. According to Harvard Health, the virus can survive on plastic up to 3 days and in some case float around in air droplets for three hours. You might feel free to roam around because you don’t see other humans, but the virus hangs around longer than other people do. 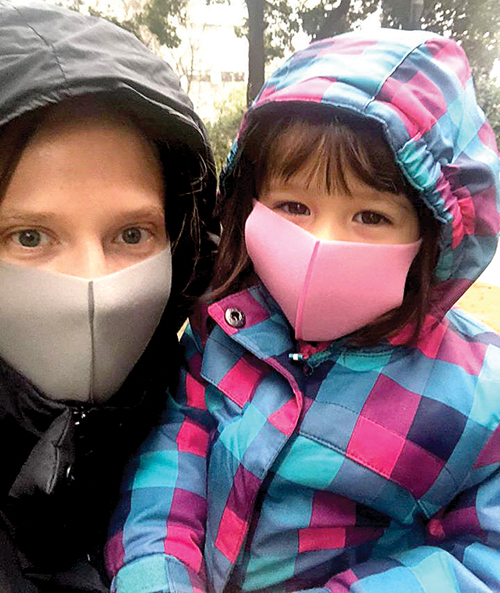 Like a vast majority of the residents in Nanjing, Morgan Gallup Zhu and her family still wear masks whenever they go out in public.

Morgan said sleeping was difficult in the beginning of the insolation and she found that afternoon naps helped her feel better. She stopped watching the news and asked her husband to handle that end of it and just let her know of anything important going on. It’s a piece of advice she’d pass on to other people in the grip of the pandemic, along with exercising every day and connecting with old friends.

A YouTube video Morgan shares with her readers outlines restrictions still in place in Nanjing as of March 31. Many places take your temperature before allowing you in. Identification is required everywhere you go, and if you are a foreigner you may be denied entry to some places. They require electronic documentation on where you’ve been. QR codes must be scanned at many places. This allows your whereabouts to be tracked. At work, temperatures are taken and reported daily. Everyone wears a mask. Most places do not let you in if you don’t. There are banners everywhere reminding citizens to do their part to stop the spread. Drones fly above and make announcements on the streets as a reminder not to gather.
Things are looking up though. Morgan said things are starting to feel normal again there.

“Restaurants, malls and businesses are reopening. Schools are starting up again this week. There are restrictions in place, like you need to wear a mask when you go into a shop. About 90% of people wear masks all the time, but generally people are feeling better and the mood is returning to normal.”

Morgan and her husband, Felix, have been instrumental in shipping 50,000 face masks to the United States. Morgan said there is no shortage of masks in China so they are hoping to fill the gap until more are available here.

I would like to thank Felix and Morgan for their efforts helping back at home and for her valuable time in documenting her journey through this unprecedented crisis.

We are all in this together. No matter where we live, let’s remember our individual efforts are what affects us all. There is no better example of this theory than now.