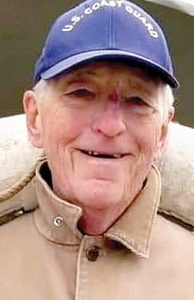 Charles (Chuck) Duff, 79, of Almont passed away April 8, 2020 in the comfort of his home. He will be remembered for his gentle, kind and loving spirit. He made everyone he met feel welcomed and treated them with nothing but love and kindness.

Chuck “Sonny” was welcomed into the world by his beloved parents Charles F. and Stella (Burke) along with a large adoring extended family.
Chuck served in the Coast guard aboard the USS Mackinaw. He later met and married the love of his life, Susan, on July 3, 1968. After 32 years with Ford Motor Company he retired, then a brief time later began a second career with Meijer. Not one to let the grass grow under his feet, he began his third career with his wife as dealers of antiques, refinished pocket knives and fishing equipment.

When he was able to take a break from his endless honey do list he enjoyed photography, fishing, restoring and collecting knives and lots of coffee and baked goods with family and friends. A die hard Michigan Wolverine and Detroit Tiger fan, he would always find a way to catch a game.

He was greeted in heaven by his parents, daughter-in-law Cheryl (Oswald), grandparents, aunts, uncles, cousins and friends.

A celebration of life will be planned at a future date when we can all be together again.

Arrangements were entrusted to Muir Brothers Funeral Home–Almont. To leave a memory or sign the guest book please visit www.MuirBrothers.com.