Living through the Coronavirus in China

Editor’s note: This is the first part in a two-part series. Look for the conclusion in the April 15 edition of the Tri-City Times.

“An American in China” is a blog written by my second cousin’s daughter, Morgan Gallup Zhu. The blog details her journey through the coronavirus crisis while living in Nanjing, China which is about a six-and-a-half-hour car ride to Wuhan. She went to China 13 years ago on a college scholarship and remained there, later marrying Felix Zhu, who is from China but studied economics at Grinnell College in Iowa, and they now have a toddler daughter. 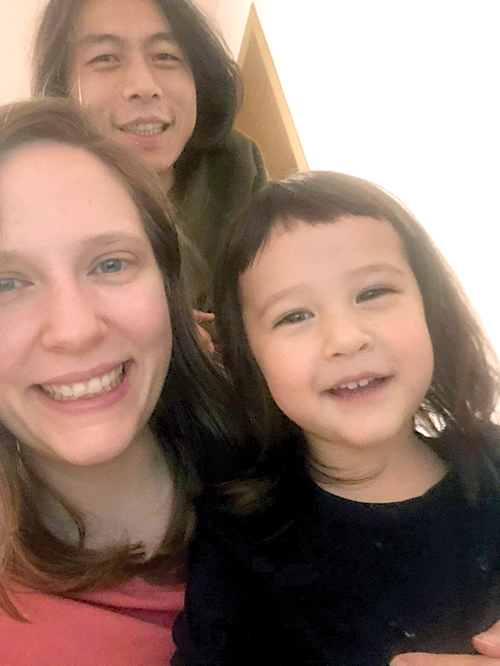 Morgan Gallup Zhu and her husband, Felix, and their daughter reside in Nanjing, China.

Her story about the coronavirus begins in mid-late January. She said her family started to isolate themselves January 23 with strict lockdowns following within days. It was 17 days later that the virus hit its peak in China.

To China’s advantage, the Chinese New Year began January 25 and ran through February 8, so everything was shut down for two weeks anyway and most people were probably somewhat prepared for a two-week hiatus.

I asked Morgan a few questions by email. Here are her answers:

•Were you ever NOT allowed to leave your home?

We were on lockdown for about 4 weeks and were not allowed to leave our home except for one family member to buy groceries every 2-3 days. China has community networks that share these rules and enforce them. They will text you and ask how you are doing every few days. A lot of these people are volunteers, but some are employed by the government. If you see your neighbor going out and breaking the rules (which did happen in some areas) then people will report it to this community manager who would contact the police. Also, if you have a fever for any reason you should report it to the community manager and go to a fever clinic. There were designated fever clinics at local hospitals that people should go to if they had a fever over 100 degrees F. In that clinic they would test people and then if you came up positive for coronavirus you would be sent to a designated quarantine hospital.

•Are the authorities saying how it started?
We have heard different things like bat soup, or snake meat, the wet market, etc.?

The main theory is that it started at a wet market in Wuhan. A wet market is a live animal market. It might have been from eating an undercooked bat or from coming in contact with a live pangolin. There was a huge uproar in China about this. It’s not a normal thing for people to eat these kinds of wild animals, more like something very rich people do or people who are trying to find something “adventurous” to try. People did a sort of online protest when they found out and shared messages about banning the wild animal trade and that these markets should not be open. The majority of Chinese people feel they are cruel and a reckless endangerment to people’s health.

•Did the government keep you updated regularly through the news? Like stay at home orders, social distancing measures, etc.?

The government in China keeps people well informed through the news, the newspapers, online channels and community organizers. There were designated articles that were allowed to be shared on social media as “official news.” These kinds of articles are clearly marked and give people a sense of reassurance that they know what’s going on. Before we reached the peak, it was very stressful because you have this feeling that it will never end. The government also partnered with large technology companies to roll out maps where you could see where all the coronavirus cases were in your city and the total numbers for your city and the country.