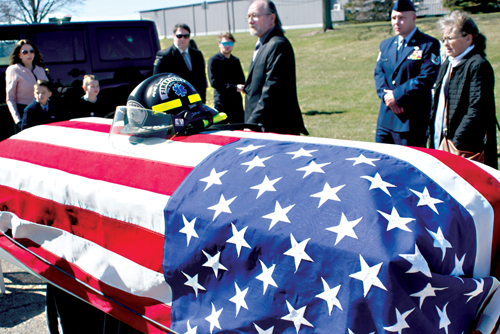 Family members and close friends assemble upon the arrival of Nathan Denryter’s casket at Lapeer High School on Friday for a motorcade procession in his honor.

LAPEER/DRYDEN — Beneath a cloudless sky on Friday morning, hundreds of people gathered at Lapeer High School to form a motorcade procession in honor of Dryden firefighter, Nathan Denryter, 39, who succumbed to cancer Sunday, March 29. 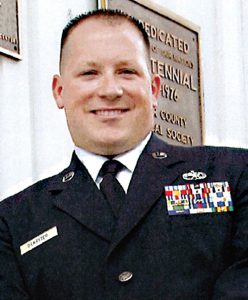 One by one, each of those vehicles passed slowly or paused in front of Denryter’s casket to pay their respects to his wife, Tracy, two children, Bryce and Bailey, and other family members and close friends.

Positioned atop the casket was Denryter’s fireman’s helmet, as a U.S. Air Force honor guard stood to each side.

With flags being flown at half-mast throughout the state on Friday, per order  of Michigan Gov. Gretchen Whitmer, the U.S. Air Force conducted a military flyover at noon.

It was a fitting tribute for a man whose adult life was devoted to serving others.

A member of the Dryden Fire Department since 2009, Denryter became an elementary school art teacher with Lapeer Schools in 2008, while simultaneously serving with the Michigan Air National Guard (U.S. Air Force) since 2002.

As a tactical aircraft maintenance specialist with the National Guard, Denryter had served four tours of duty; two each in Iraq and Afghanistan.

Dryden Twp. Fire Chief Mark Hagemeister was among those to share his sentiments about his fellow firefighter’s passing.

“Nathan put his heart and soul into everything he did,” said Hagemeister. “No matter what he did, he always gave it his all.”

Fellow Dryden firefighter and close family friend, Jeff Sturza, said he and Nathan spent many hours riding and working on motorcycles; one of his many passions.

“Nate loved motorcycles and his Jeep,” said Sturza. “He was a good artist and we put in a lot of time restoring motorcycles over the years.

“He also loved playing hockey and he was friends with (former Detroit Red Wing players) Darren McCarty and (Nicklas) Lidstrom.

“But most of all,” Sturza said, “he loved his family and he was a great husband and father to the kids.”

In a written statement, Hagemeister described Denryter as “a man of service, a man of giving, a man of the community and a man that loved it all — especially his family.

“Nate was a National Guardsman, a firefighter and Medical First Responder, a school teacher, a hockey player, a devoted family man and a man of God,” Hagemeister said. “He lived life to its fullest; always putting others first. That is just who he was.”

Hagemeister noted that Denryter had served four years on the Kenockee Fire Dept. and almost 11 years with the Dryden Twp. Fire Dept.

He pointed out that during his time as a firefighter, Nathan, along with another firefighter, had saved the life of a fellow hockey player who collapsed on the ice from a heart attack.

As a result, said Hagemeister, “that man was able to spend more time with his family and loved ones.

“He had been involved with other CPR saves while responding for Dryden Fire Dept. Medical First Responders and absolutely comforted and improved the quality of life for all those that he responded to.

“We are all better people to have known Nate,” Hagemeister said. “He has left a huge hole in the lives for everyone he has known and will be greatly missed by all.”

In a final tribute, Nathan was laid to rest at Great Lakes National Cemetery on Monday, April 6.