TRI-CITY AREA — The Tri-City Times caught up with some coaches, parents and athletes and got their reaction following the announcement that the remainder of the high school sports season was called off by the Michigan High School Athletic Association due to coronavirus pandemic health concerns last Friday afternoon.

Here is there take on the situation and what it means to them moving forward:

“When the MHSAA canceled the season I couldn’t even bring myself to think about it,” Bannister stated. “It made me sad as I have been coaching 22 years, 19 of them in Imlay City,” she noted. 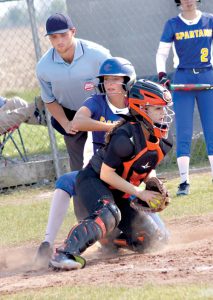 “Their decision to cancel the season is the correct move but my heart breaks for the seniors out there. Thankfully this year I did not have a senior on my team but was anticipating a strong season from us. I have a lot of kids in my program that have worked hard all year for this spring. My girls started preparing for the spring last summer by playing summer ball. Many of them took part in travel programs throughout the fall and winter.

And that commitment did not stop there either.

“As a team we have been meeting on Sundays for hitting the 2 1/2 months prior to our season,” Bannister said. “So I do feel bad that their hard work won’t get a chance to shine,” she noted.

Almont Varsity Softball Coach Erik Johnson agreed that the move to bring things to a halt was one that had to be made.

“The cancellation of our spring sports season is an unfortunate but necessary decision,” Johnson said. “I was really looking forward to coaching this talented group of players this season,” he noted.

“Regardless of the decision, I had continued to ‘coach’ via group text, sharing resources to help keep the athletes active and will continue to do so through this unpredictable time. It’s my hope that we can get back out on the fields for our travel season to at least have the opportunity to play. For our seniors that don’t continue with travel ball or plan to play college ball, I’ve pleaded with them to keep perspective and know they can keep playing through other means (recreational, intramural, etc.). We will persevere and, hopefully, never take for granted these opportunities to play!

Dryden Athletic Director Loraine Brinker was next offer her reaction on the recent events.

“Our student athletes’ health trumps everything,” Brinker commented. “I would be lying if I didn’t say I was disappointed, but I am also not willing to jeopardize our student athletes, their families and our community,” she noted.

“It is heartbreaking!” Imlay City parent Lesley Forti stated. “I understand the reason for the decision but the virus has taken so much away from these kids,” she noted.

“Our students have trained hard all year and were looking forward to the competition this season. My heart goes out to all of the athletes of our area, especially the seniors, who didn’t get a proper sense of closure for their seasons. Hopefully, we will see everyone again soon, but for now we will keep training at home prepping for the next season.”

Parents such as Imlay City’s Lesley Forti wondered what might have been, had the winter season finished up and the spring season took place.

“As you know our girls’ basketball team was having a history-making season and was about to play in the regional championship game when this all began. We will never know how far they would have made it. Now, moving into spring sports, it saddens me my kids will miss out on the spring sports season. More heartbreaking, is not seeing my son play his senior baseball season.”

Dryden senior Ronny Hudson, who plans to attend the University of Michigan in the fall, took time to reflect as his high school athletic career wound down.

“You try and play every game as if it is your last and I can say I have done that,” Hudson said. “To be in the district basketball finals, something I have worked for the past three years, and not be able to go out on your terms, it does sting,” he noted.

“I have been blessed to be able to fall in love with running (he runs both cross country and track) and while I am not able to have a senior track season that doesn’t mean running ends for me. I have cherished every moment of high school sports and I am thankful for all my teammates I have been close to and my coaches who put their trust in me.”

Almont senior Katrina Kline, who will run at the next level for Michigan’s Rochester University, also will not have the chance to toe the starting-line at a high school meet again.

“This whole situation is very disappointing,” Kline said. “I am not too upset about missing track because I know there are more seasons to come when I compete at the next level,” she noted.

“However, I wish I had one more opportunity to race with my sister Molly and train with Heather Fitchett. My heart goes out to the seniors who missed out on their last season.”