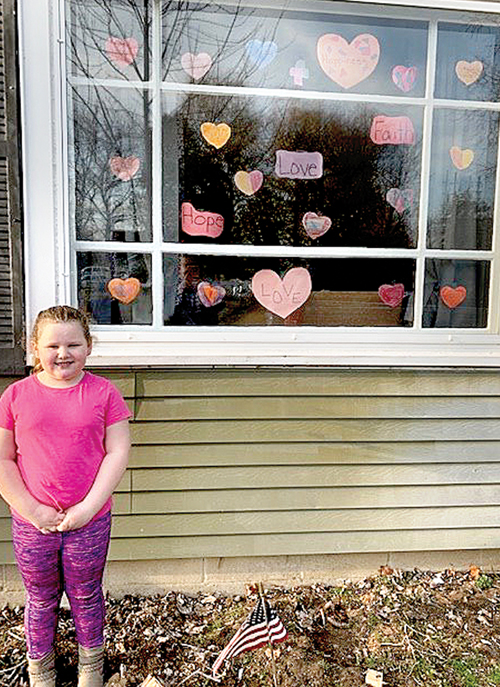 Six-year-old Myla Brown poses in front of window filled with paper hearts she hopes will bring smiles to people’s faces.

CAPAC — Things can be confusing when you’re six years old, full of energy and limited to spending your days stuck at home.

For now, that is the life of Capac kindergartener Myla Brown and millions of other kids whose lives are being affected by the spread of the coronavirus.

Myla’s mom, Katie Klug Brown, said her daughter is unable to understand why she, her parents and 3-month-old brother, Emmett, are essentially confined to their home and immediate surroundings.

“She really doesn’t understand what’s going on,” said Katie “She’s just a little girl who loves to dance and have fun. She misses being able to go to dance class and seeing her friends.

“It’s also hard for her to make sense of why she can’t see her grandparents (Kerry and Nancy Klug), her friends and other family members right now,” she said.
This week, possibly realizing that something is amiss in the world, Myla expressed an interest in doing something positive that would put smiles on people’s faces.

She accomplished that goal by coloring and cutting out dozens of various-sized paper hearts, which now adorn the front windows and side door of the family’s residence on North Lester Street.

“Myla said she wanted to do something nice for people to make them feel better,” Katie said. “Originally, she wanted to put a big sign (thanking health workers) in the front yard, but we didn’t have the poster board or material to do that.”

As an alternative, Myla, with some help from mom, switched gears and decided on the paper hearts idea.

“She knows that hearts mean love,” said Katie. “So we settled on making the hearts, which I stenciled out and she colored and cut them out.”

Now the family’s home stands out as a beacon of hope to the countless others struggling with job loss and uncertainty about their futures.
Indeed, Myla’s dad, Jason Brown, is among those to suddenly find himself unemployed because of the massive layoffs.

While reeling with the existing harsh realities herself, Katie hopes that some will find some comfort in Myla’s heartfelt project.

“We’re hoping people will smile when they drive by,” said Katie. “It’s our way to thank those working in the healthcare field, and to show love to everyone during a rough time in our lives. I hope this brightens someone’s day.”

Moreover, she hopes that the painted hearts will bring smiles to people’s faces—just as Myla had intended.