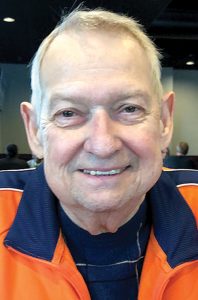 He served in the U.S. Marine Corps during the Cold War and the Cuban Missile Crisis from February 13, 1959 to February 12, 1963. Neal earned medals as a Rifle Sharpshooter, Radio Telegraph Operator, and Good Conduct.

He married Leota Fay Hicks on May 11, 1963 in Detroit, MI. He was predeceased by his wife, Fay, on February 6, 2016. Neal was a die maker at L&L Products in Romeo for over 20 years. He retired from L&L Products in Romeo in 2013. Captain Neal loved taking his family out on his pontoon boat on the lake.

Neal was preceded in death by wife, Fay Holtz; and his brothers, Gary Holtz and Dale Holtz.

A celebration of life will happen in the summer closer to his birthday of August 18.

Please be sure to sign the online register book at muirbrothersfh.com to share your memories and condolences with the Holtz family.