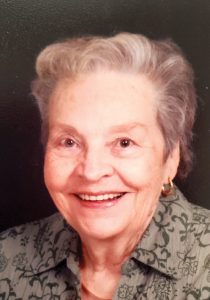 Mary Ellen Kaufman, 90, of Fort Gratiot, formerly of Capac and Almont, passed away on Saturday, March 28, 2020.

She was born December 27, 1929 in Detroit to the late Walter and Gwendolyn Bussell. She married Richard “Robbie” Robinson in 1949 and together they raised their three children in Capac. Robbie died in 1976. Mary Ellen married Fred Kaufman in 1981. He died in 2002.

Mary Ellen was a 1947 graduate of Capac High School. She was a lifelong member of St. John’s Lutheran Church in Capac. She wintered for 28 years at Valleydale Estates in Zephyrhills, FL. Most recently she resided in assisted living at the Sanctuary of Mercy Village.

A memorial service will be held at a later date at St. John’s Lutheran Church in Capac.

Memorial contributions can be made to St. John’s Lutheran Church.