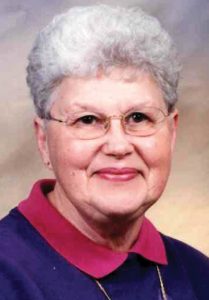 Marlene Shirley Hannenberg was born May 15, 1931 in Detroit, MI. She was the daughter of the late Fredrick and the late Alberta (Kessig) Hannenberg. Marlene grew up in Detroit, MI. She was a graduate of Dominican Catholic High School, Class of 1949. Marlene married Peter Bennie on January 26, 1957 in Detroit, MI. They lived in St. Clair Shores until 1965 when they moved to Romeo, MI. In 1978, Marlene and Peter moved to Imlay City and then to Almont in 1985. Peter preceded Marlene in death in 2017. She was mostly a homemaker, raising her family. Through the years Marlene was employed at Chrysler Motors, Bill Green’s Restaurant in Imlay City, and Turri’s Restaurant in Almont. Marlene was a member of Sacred Heart Catholic Church in Imlay City, MI and St. Cornelius Catholic Church in Dryden, MI.

She was preceded in death by her husband, Peter Bennie; parents, Fredrick and Alberta Hannenberg; and her brother, Gerald (Phyllis) Hannenberg.

Arrangements were made by Muir Brothers Funeral Home, 225 N. Main Street, Imlay City, MI. Please be sure to sign the online register at muirbrothersfh.com to share condolences and memories with the family.