IMLAY CITY — Due to uncertainty about the duration of the coronavirus, the Imlay City Chamber of Commerce Board voted on Monday, March 30, to postpone indefinitely the annual Chamber Auction and the 2020 Busker Festival.

Both decisions were unanimous and took place during a virtual meeting of the Board.

The Board also agreed to a temporary layoff for Chamber Director Shannon Hamel, which will take effect Friday, April 3. Board member John Powell cast a lone dissenting vote to Hamel’s layoff.

On Tuesday morning, Hamel indicated she was willing to continue to be assistive to the Chamber, with the expectation she will return to her duties at some point in the future.

“There’s just a lot of unknowns right now about the virus,” said Hamel. “Especially how long it’s going to take to get through this and get back to normal.”

Hamel said the Busker Festival might still be rescheduled at a later date in the year. “As of now,” she said, “we don’t have a date marked out for when it will be.”

The Chamber Auction was originally due to take place on March 28 and officials decided to temporarily postpone it in mid-March. The 2020 Busker Fest was scheduled to take place June 12-13. 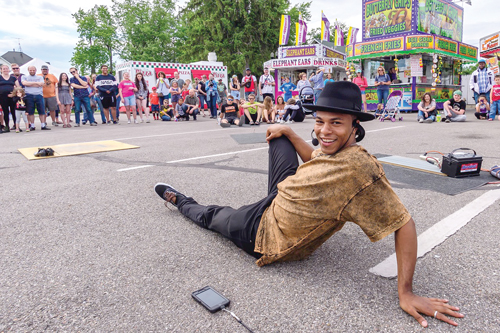 Busker entertainer Snap Boogie was among those to perform at last year’s Busker Fest in Imlay City. This year’s event, scheduled for June 12-13, has been postponed indefinitely due to COVID-19.

Hamel said the Chamber could lose out on about $500 in deposit fees already paid out for the Busker Festival; including deposits for tent rentals, porta-potties and a petting zoo.

Chamber of Commerce President Barb Yockey views the decisions as regrettable but necessary given the ongoing crisis.

“It’s with great regret we decided to temporarily layoff our executive director,” Yockey said. “It was an extremely difficult decision because Shannon makes such amazing contributions to our businesses and community every day.”

Yockey noted that because most of the Chamber’s member businesses are shut down, there is not very much business to conduct.

“We also need to conserve our financial resources so we can come roaring back at full strength as soon as businesses start reopening,” Yockey said. “We want to emphasize this is only a temporary layoff. We will bring her back as soon as possible.”

Meanwhile, Yockey said the Chamber will continue doing all it can to help businesses and the community. For immediate questions or assistance, call 810-542-3256 or email executivedirector@imlaycitymich.com.

“We are continuing to provide services to our members in this time of incredible personal and business upheaval,” Yockey said.