TRI-CITY AREA — The Tri-City Times is pleased to announce that we’ve been named the 2019 Michigan Press Association’s “Newspaper of the Year” in the Weekly/Class C category. 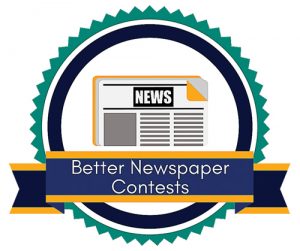 Newspaper of the Year awards are presented to the top publication in each of eight circulation classes based on points accumulated in the annual Better Newspaper Contest.

Members of the Montana Press Association reviewed and judged the entries in this year’s contest.

“We’ve had a top three finish in the Newspaper of the Year contest for several years now, so it’s nice to have this honor of top newspaper as judged by our peers. I know our publisher, Delores Heim, is proud of this accomplishment. She knows how hard everyone works and proud that this newspaper continues to serve our readers and advertisers using a philosophy of strong community newspapering,” said General Manager Randy Jorgensen.

Editor Emeritus Catherine Minolli racked up the most awards, helping propel our paper to the top spot.

Minolli, who retired from her post in September 2019, earned six individual awards including her sweep of the ‘Best Editorial’ category where she nabbed first, second and third place.

She earned a second place for her Feb. 2019 Feature Story submission, “From the heart,” about Capac’s Carol Nemecek’s story of survival from a near-fatal heart attack.

Maria Brown, then assistant editor, took second place in the Business/Agriculture News category for her July 2019 story “End of an Era,” detailing the Stuever family’s decision to stop milking cows on their Lynn Township farm.

Our Sports Editor, Kevin Kissane, took first place in the Sports Photo competition for his March 2019 photo of Capac’s Jordan Helmuth driving to the hoop during the Chiefs’ Division 3 boys’ basketball regional game.

Staff writer Tom Wearing earned first place in the Spot News Story category for his August 2018 piece, “Community stunned after double tragedy,” that detailed the tragic hit and run incident on M-53 in Imlay City that resulted in the death of Almont’s Rick Dahn and the eventual suicide of the driver at fault, Alexander Waschull.

“The outstanding quality of work shows that the press is strong in Michigan and we are proud of the accomplishments of all the winners,” said Michigan Press Association President Richard Lamb.

“The effort by these journalists and community newspapers show that excellence is the standard for newspapers in our state.”