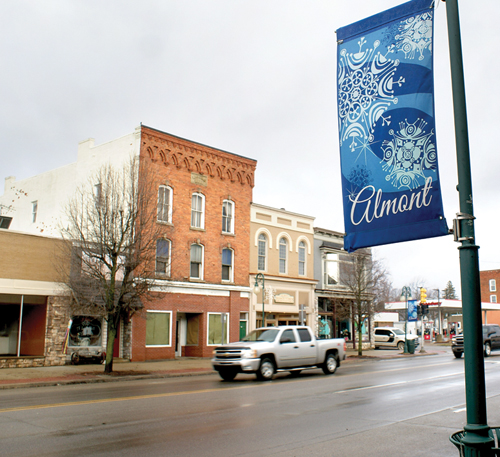 Almont DDA Board members are hoping the streetscape project will be completed by no later than mid-summer of 2020.

project is set to begin soon

ALMONT — The Almont Downtown Development Authority (DDA) Board has awarded a construction bid of $193,275 to Superior Contracting of Dryden for its upcoming downtown streetscape project.

DDA Director Kim Schall said because the DDA is not obligated to go with the lowest bidder and because the two lower bids were higher than the original ($132,000) estimated cost for the project, Spicr Group project engineer Dave Boersma recommended that the lower bidders apply “value engineering” to reduce the overall cost.

As a matter of note, value engineering is a methodology used to analyze the function of goods and services to obtain the best possible result at the lowest total cost, and without reducing the quality of performance.

“At Spicer’s recommendation, we asked both contractors to resubmit their bids,” said Schall, “but minus the cost of landscaping.”

The resubmitted bids resulted in a bid of $196,250 from Warren Contractors and a bid of $193,275 from Superior Construction of Dryden, which was recommended by Spicer.

“In this case,” Schall said, “we went with the low bidder because it’s a local contractor whose services the village has used for past municipal projects.”

Schall said the DDA will contract with American Tree of Almont to do landscaping for the project.

Landscaping upgrades will require the removal of 32 overgrown pear trees and replacing them with smaller, slower-growing trees.

Schall said the old trees are being replaced because their root systems are becoming entangled with the infrastructure in the area; and because their overgrowth obscures the view of downtown businesses along the east and west sides of Main Street (VanDyke), particularly during the summer months.

The project will also involve the removal and replacement of sections of uneven and raised concrete, along with the installation of new planter boxes with “kneewalls” to reduce maintenance costs.

Schall said American Tree has been contracted to conduct all of the landscaping work and will perform the required maintenance, to include watering, at a cost of $17,410.

She said the project will start when the Frost Laws are removed and the contractor can get on site.

“We are hoping for April or May,” said Schall, “with a completion date of no later than July 31.”

Schall reminded that DDA’s 2020 streetscape project is being substantially funded through a USDA matching funds grant in the amount of $56,520, which was awarded to the organization in 2019.