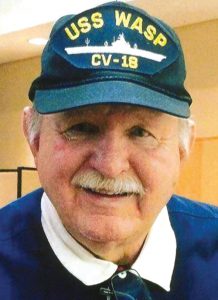 Robert Ashpole, Sr., 88, of Imlay City, MI died Saturday, March 14, 2020 at Lapeer County Medical Care Facility of Lapeer, MI. Robert Charles Ashpole was born January 5, 1932 in Minneapolis, MN. He was the son of the late Leonard and the late Dorothy Ashpole. He grew up mostly in the Port Huron area. He served in the Navy during the Korean War from 1949 to 1953. His service during the Korean War was on-board the USS Wasp, an aircraft carrier.

When he returned from the service to his country, he attended Detroit School of Business and received an accounting degree.

He married Phyllis Anne LaCrosse Kriewall on August 3, 1974 in Mt. Clemens, MI. Bob worked for John Carlo Enterprises, Road Construction as a civil engineer for over 20 years. He retired from John Carlo Enterprises, Inc. in the late 1990s as a vice president. After he retired, he did some cost-estimation for other contractors around the area.

Bob enjoyed his family, fishing, boating, RV traveling with his wife, Phyllis, and listening to jazz music from the 1950s. He would spend time at many different golf courses as a tee-time starter.

Bob was preceded in death by his parents; and a sister, Lavonne Falk.

A graveside service for burial of cremated remains will be held at Great Lakes National Cemetery, 4200 Belford Rd., Holly, MI, on a later date.

Please be sure to sign the online register book at muirbrothersfh.com to share your memories and condolences with the family.