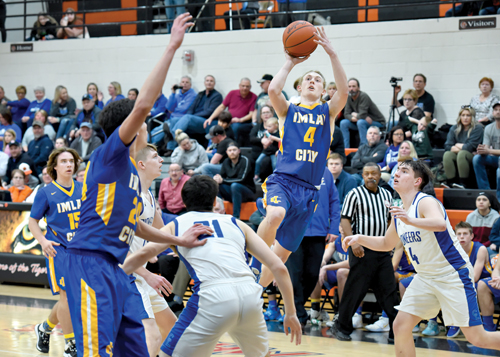 Will Tolley, of Imlay City, goes up for a shot during his team’s Division 2 district contest versus Cros-Lex last Wednesday. Photo by StudioE Photography

Armada High School is where the game was contested.

With the outcome, Imlay City wraps up its season as owners of an 8-13 mark.

In Wednesday’s clash, Cros-Lex charged out to a 23-12 advantage after one quarter was complete.

The next eight minutes of play would see Cros-Lex amass 22 points and Imlay City manage 12, pushing their lead to 45-24 at the halftime break.

When the action resumed, Imlay City fought back with a 15-14 third quarter edge. That trimmed their deficit to 59-39 with 24 minutes gone.