Ford Field, in Detroit, is where the action unfolded.

Stanton opened his stint at states with a win by pin 1:04 into his bout against Lake City’s Cade Wolf. Those competitors entered the fray sporting 39-5 and 30-7 records, respectively.

He then met Napoleon’s Brenden Yob, who was 29-9 when they met, next.

It was there Stanton raised his mark to 2-0, thanks to a 7-2 victory over Yob.

Those results secured Stanton a semifinal appearance where he squared off versus Monroe Jefferson’s Cody Richards, who headed into their battle at 50-6.

When the encounter ended, Stanton had prevailed 6-4 in sudden victory over Richards (the eventual sixth-place finisher).

That landed Stanton a spot in Saturday’s championship match versus Dundee’s Braeden Davis, who was 41-4, when they collided. That encounter drew to a close with Davis ahead by a 16-1 count.

For his effort, Stanton drew All-State plaudits (reserved for the top-eight finishers in each weight division).

Stanton concluded the season at 42-6.

Dwyer would come close to duplicating his finish position, obtaining a third.

He started things off Friday with a 9-0 win against Lake Odessa Lakewood’s Keegan VanAlstine. Those wrestlers began tournament action as owners of 39-10 and 30-11 marks, respectively.

Dwyer then challenged Dundee’s Kyle Yuhas, who was 26-11 when they met, next.

It was there Dwyer picked up a 9-1 victory.

Dwyer then fell to 2-1 for the tournament with a 5-3 semifinal loss to Dundee’s Christian Killion, who was 47-6 when they squared off. Killion would go on from there to take first in the weight class.

Those verdicts locked up a spot for Dwyer in Saturday’s consolation semifinal where Dwyer met Sanford Meridian’s Nicholas Dodman, who entered their confrontation at 49-8.

When the bout ended, Dwyer had prevailed 4-3 over Dodman (the eventual sixth-place finisher).

That landed him a spot in the third-place match versus Powers Catholic’s Connor Owens, who was 36-10 when they tangled. The encounter finished with Dwyer up 2-1.

For his performance, Dwyer earned All-State accolades (reserved for the top-eight finishers in each weight class).

Joe Harper would headline for Imlay City at the Division 2 event, securing a second-place showing.

Harper got his stint at states underway with a win by pin 5:57 into his bout against Madison Heights Lamphere’s Ian Allison. Those competitors entered the fray sporting 46-1 and 30-22 records, respectively.

He then challenged Lowell’s Tyler Delooff, who was 25-6 when they met, next.

It was there Harper moved to 2-0, prevailing 3-1 in sudden victory over Delooff (the eventual third-place finisher).

Those results locked up a semifinal appearance for Harper where he squared off versus Chelsea’s Josiah Fitch, who entered their clash at 44-7.

When the bout wrapped up, Harper prevailed via a pin with 5:16 gone over Fitch (the eventual fourth-place finisher).

That landed Harper a spot in Saturday’s championship match versus Mason’s Jack Gilchrist, who was 48-2 when they met. Their encounter concluded with Gilchrist up 8-2.

For his effort, Harper drew All-State plaudits (reserved for the top-eight finishers in each weight division). 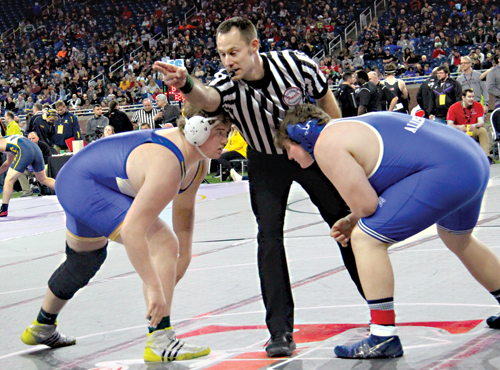 Imlay City’s Joe Harper looks to square off versus his 285-pound weight class counterpart at the Division 2 state finals.

Harper concluded the season at 49-2.

Competing in the Division 2 state finals at 119 pounds, Sandzik opened tournament action Friday against Warren Woods Tower’s Joe Haynes. Those competitors entered the fray as owners of 37-17 and 49-3 marks, respectively.

It was there Haynes (the eventual first-place finisher) won by a pin with 1:17 gone.

The Imlay City grappler then faced Sparta’s Hayden Cook, who was 38-13 when they met, next. Their confrontation drew to a close with Cook ahead 10-2.