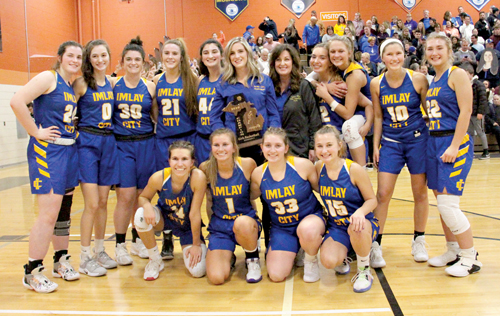 Members of the Imlay City girls’ basketball team pose for a photo after claiming a Div. 2 district title last Friday over Marysville.

IMLAY CITY — The Imlay City varsity girls’ basketball team saw to it that their postseason path would continue a bit longer, rolling to a 43-29 victory over Marysville in a Division 2 district championship matchup last Friday night.

Almont High School is where the contest took place.

With the outcome, Imlay City advances to a regional semifinal clash at Goodrich High School. There they will square off versus Bloomfield Hills Cranbrook.

In Friday’s district championship matchup, Imlay City bolted out to a 14-4 advantage after one quarter was over with.

The next eight minutes of action would see Imlay City generate 13 points and Marysville manage 10, pushing their lead to 27-14 at the halftime break.

When the action resumed, Imlay City widened the gap even more. Aided by a 13-9 third quarter edge, the Spartans took a commanding 40-23 advantage with 24 minutes gone.

Marysville then put together a 6-3 fourth quarter rally, only to drop a 43-29 verdict when the final second ticked off the clock.