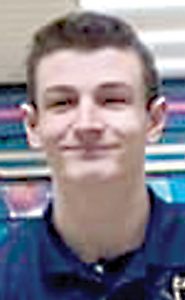 That landed Braun a spot in the round of 16 where he faced Livonia Clarenceville’s Ryan Bishop.

When the final scores were added up for the two-game match, Braun notched a 375-365 victory.

He then followed it up with a 392-362 quarterfinal victory over Saginaw Swan Valley’s Zachary Mitchell and a 430-406 semifinal triumph against Standish Sterling’s Kobe Adams.

That placed him in the title match where Jonesville’s Logan Teubert provided the opposition.

Braun’s teammate, Adam Savage, nearly joined him in the round of 16.

That tied him with Essexville Garber’s Zachary Moore for the 16th and final spot in the round of 16. It was there Moore took the one-game rolloff, moving on with a 202-161 win.