Also expected to grow between now and the 150th anniversary event is the hair on the faces and chins of local menfolk. 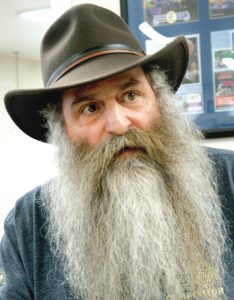 Sesquicentennial Committee members have announced that Imlay City will be host to a “world class” beard and mustache growing competition Saturday, Aug. 8 from 4-8 p.m. in the festival’s entertainment tent downtown.

This will not be the first time Imlay City has hosted a beard-growing contest to celebrate a milestone in the community’s history. In 1970, for the city’s Centennial celebration, a ‘Brothers of the Brush’ competition enjoyed wide support from male community members.

On Friday (March 6) committee members met with Michigan’s own Mark Byrnes, the 2019 North American Champion for the Best-styled Mustache in the 6-to-12-inch “natural beard” category.

Byrnes says he and his close fraternity of beard and mustache growers are always anxious to get together again—purely for the fun of it.

He notes they will not expect compensation nor remuneration for their participation in the event.

“We’re not about making money,” says Byrnes. “We’re about getting together and having a good time—and showing off our beards, mustaches and goatees.

“We all do get really excited about winning trophies and bragging rights,” he admits. “And we also like getting mementos from the different events; like patches, buttons, pins and t-shirts.”

He says the event will be open to both veteran and novice growers in various categories; as well as to fun-loving and creative women and children capable of fashioning their own beards and mustaches.

Byrnes says trophies will be awarded for “Best of Show” and for all 1st, 2nd and 3rd-place winners in the various categories.

He says money raised from entry fees for the Beard & Mustache competition will go toward a good cause, although the specific cause or charity has yet to be identified.

Given the frequency of alleged sightings of cougar, coyotes, panthers and bears in the vicinity of Imlay City, Byrnes urges all local residents to keep
their eyes open for Sasquatch.

Though many consider the existence of “Bigfoot” (or Sasquatch) to be mere folklore, others swear to have seen the hairy, upright-walking creatures lurking in our midst.

“We’ll be looking for people who may have evidence of the Sasquatch,” says Byrnes. “Whether they have photos or have seen footprints, we want to hear about it.”

Should Sasquatch reveal himself around Sesquicentennial time, Byrnes insists he will not be eligible to compete in the Aug. 8 Beard & Mustache contest.

For more information about the Imlay City Sesquicentennial, the Beard & Mustache competition, or the Sesqui-Search for Sasquatch, contact the Imlay City offices at 810-724-2135 or visit the City of Imlay City website at www.imlaycity.org.