Grapplers in action at Ford Field

Stanton, Sandzik, Dwyer and Harper compete to earn a spot on podium

TRI-CITY AREA — When the individual wrestling state finals unfold this Friday and Saturday at Detroit’s Ford Field, there will be four competitors hailing from our Tri-City schools testing their mat skills.

Imlay City qualified two of their grapplers to move on to the Division 2 state finals.

The winner of that clash meets the survivor of an encounter between Otsego’s Josh Sunnerville (40-3) and Sparta’s Hayden Cook (37-10).

The victor of that battle squares off against the winner of a bout between Lowell’s Taylor Delooff (18-5) and Eaton Rapids Jaden West (30-12). 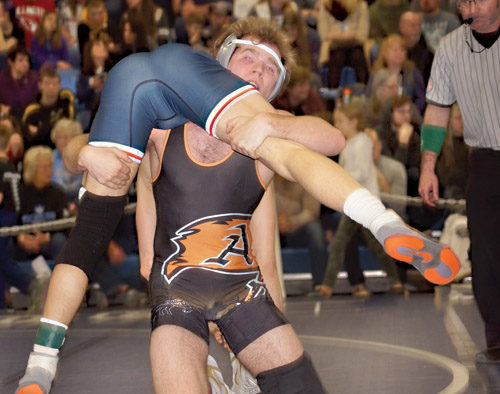 Almont’s Mathew Dwyer lifts an opponent during a match this season.

Almont will be represented by 103-pounder Dallas Stanton at the Division 3 state finals.

The winner of that bout meets the survivor of an encounter involving Napoleon’s Brendan Yob (27-7) and Lansing Sexton’s Robert Thang (29-4).

The victor of that clash faces the survivor of an encounter between Flint Powers’ Connor Owens (30-8) and Portland’s Jared Thelen (36-13).