IMLAY CITY — Imlay City saw to it that they would clinch the Blue Water Area Conference title outright, accomplishing the feat with a 42-20 triumph against visiting Armada in a varsity girls’ basketball encounter last Friday night.

It marked the first time since the 1999 campaign Imlay City has earned the distinction of league champions. 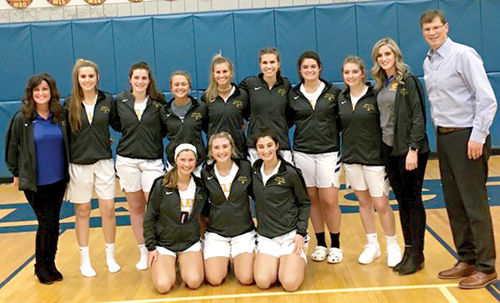 The Imlay City varsity girls’ basketball team poses for a group photo after wrapping up the BWAC title last Friday.

In Friday’s encounter, Imlay City charged out to a 12-5 advantage after one quarter was over with.
The middle two quarters saw Imlay City add 22 total points and Armada net 12, giving them a 34-17 lead with 24 minutes gone.

Imlay City then outscored Armada 8-3 the rest of the way, assuring themselves of a 42-20 win at night’s end.