Schoonover has plan for downtown space 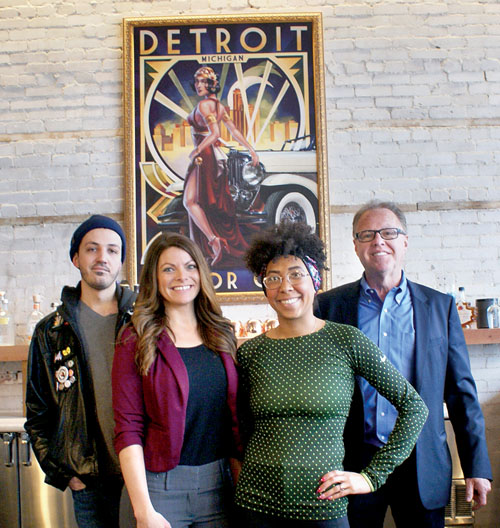 ‘Third & Main Event Center’ to be

IMLAY CITY — Jim Schoonover, president and owner of Vintech Industries, plans to open a facility for special events in the former Mulefoot/Hiram’s restaurant space at the corner of Main and Third streets.

Schoonover, owner of the now-vacant building at 244 E. Third St., approached the Imlay City Commission on Tuesday, Feb. 18 to seek approval to apply for a liquor license for his new establishment called the Third & Main Event Center.

Schoonover says the business will be perfectly suited for hosting special events, such as anniversary parties, bridal showers, funeral dinners, business, organization and club meetings and for numerous other private and community events.

When the former tenants left, Schoonover was able to acquire the building’s existing stove and cooking equipment, tables and chairs, the bar and numerous other amenities.

He expects to be able to accommodate as many as 100 guests, when utilizing both the building’s indoor and outdoor spaces.

Schoonover also plans to use the space himself for various Vintech business and staff meetings; noting that the building’s upstairs living area is already being used to house out-of-town business guests.

Though at first disappointed when his former tenants moved out, Schoonover says he now views it as a new opportunity, and he’s eager to move forward with his plans.

“I never listed the building for sale and I have no plans to sell,” says Schoonover. “When the former tenants moved out, I elected to not lease it out for another restaurant.”

His intention is rather to “be a good steward” of the downtown building and property for the future.

“I really don’t need the money,” he says. “It’s more important to me to be able to do something good for the community.

“I believe there is an interest and need for an ‘upscale’ location for special events in downtown Imlay City — which is what I want to do. My ultimate goal is to make everybody proud.”

The application and approval process is expected to take up to 90 days, but hopefully fewer.

The downtown location should already meet all of the LLC’s requirements for eligibility, to include:

•Being a business engaged in dining, entertainment or recreation;

•Being open to the general public at least 10 hours per day, five days a week

•Have a seating capacity of at least 25 people;

•Have total investment over the last three years in real and personal property in the redevelopment area.

Natke is equally enthusiastic about the opportunities the space will provide for Imlay City residents and non-residents.

“Mr. Schoonover is someone who is very supportive of this community,” said Natke. “He’s pursuing this project as a way to give back to the community.”

At the same time, he will be occupying what is currently an empty space in the city’s downtown district.

“This project will help bring more people downtown,” Natke said. “I feel it will be an exciting addition and help bring added vibrancy to Imlay City.

From her position, Natke wants to utilize the space for future DDA-sponsored events, such as ‘Art in the Rough’ in September; and for the City of Imlay City’s Sesquicentennial (150th Anniversary Celebration) coming to town August 7-9.

Those wishing to rent out the facility have the option of hiring their own caterer or being provided recommendations for local caterers.