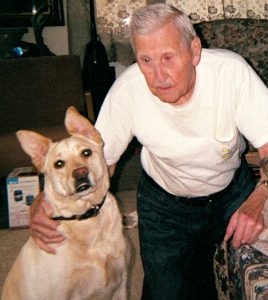 Charles Willwerth passed away peacefully February 15, 2020 at the age of 88. He was born in Dryden, MI on July 29, 1931 to Joseph and Katherine (Lang) Willwerth. He was the youngest of eight brothers and sisters, and was preceded in death by all. He attended the country school in Dryden and graduated from Imlay City High School, class of 1950. Charles married Joan Daley on May 24, 1952 and they had two daughters, Susan (David) Wolfe and Joy (Terry) VanPutten. He also had two grandsons, Brennan and Kyle Kalbfleisch.

Charles worked a short time at The Chuck Wagon before his 25 year career at Champion Home Builders, both in Dryden. He then owned and operated Willwerth Upholstery with his daughter Joy for almost 30 years.

He traveled most of the United States, owned classic cars and Harley Davidson Motorcycles, was an avid hunter and fisherman, an excellent cook and gardener, and could fix or build just about anything. He loved his dogs, his family and his friends. He will be missed dearly by all.

Burial will take place at a later date.