CAPAC — Village officials, at a meeting with the school district earlier this month, have reiterated their desire to proceed with the sale of the Capac Middle School.

President Pro-Tem Joe Nemecek and council member Joe Herrington said at the Feb. 18 village council meeting that they reminded school officials of their desire to start seeking bids for the shuttered building and property, noting the council voted back in July of 2019 to make that declaration.

Attorney Al Francis recommended the council work with the district to determine how sale proceeds would be split between the two entities and once that those figures were determined, lawyers could draft an agreement. Francis’s firm—Fletcher, Fealko, Shoudy& Francis—represent both the village and school district but he said that shouldn’t pose an issue as long no disputes arise between the parties. 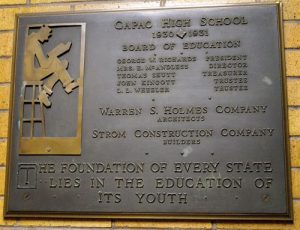 A plaque in the entrance to the now vacant Capac Middle School commemorates its construction in 1930-31. An appraiser has been asked to determine how proceeds from the building’s sale should be split between the village and district.

The district owns the building and the village owns the property. The building, originally used as a high school, was built in the early 1930s.

On Tuesday, Supt. Jeff Terpenning confirmed that the district has asked their appraiser to provide a recommendation as to how the value should be split between the two entities. An appraisal was completed on the site last fall.

After that the two parties will need to meet again to discuss percentages and then put their agreed upon numbers in writing.

The building has been mostly vacant since middle school classes were moved to the elementary and high schools in 2016 as part of a reorganization plan.
Since then the district has used portions of the building for their Virtual program, some summer programming and the robotics teams have used the school’s gymnasium.

•the council voted to give two property owners 60 days to repair or remove structures from their property that have been deemed dangerous—an outbuilding on Neeper Street and a pool and shed on Walker Street.

•members voted to have Spicer conduct soil borings on Main Street next month. The work will be done in preparation for seeking grant dollars from the Michigan Department of Transportation to resurface Main Street between Aldrich and Meier streets. The work is estimated to cost $4,500.