TRI-CITY AREA — If at first and second try you don’t succeed, the Friends of the Polly Ann Trail group is hoping the third time will be the charm for them.
In 2017 and 2018, the Friends organization applied for $300,000 in grant funding from the Michigan Natural Resources Trust Fund for the purpose of making major improvements to the state-owned trail between Imlay City and Dryden.
Each time, the organization’s request was denied for failing to score high enough on their grant application.
Given the previous disappointments, David Howell, Chairman of Friends of the Polly Ann, said the group has hired a grant writer to prepare and submit the 2020 application.
The most recent application was adopted in a resolution approved by the Lapeer County Board of Commissioners on January 30, 2020.
Based on a motion by Board Vice Chair Ian Kempf, the county authorized Lapeer County Parks to seek grant funding from the Lapeer County Community and Four County Community foundations for the project.
Both foundations made matching pledges at the time of the 2018 grant request. 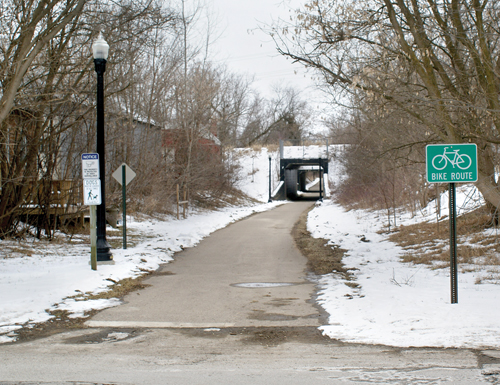 The Polly Ann Trail as seen in Imlay City at Fourth Street. The Friends group hopes to develop the trail from the city limits south to Dryden with grant funding.

The request is contingent on Friends of the Polly Ann raising $100,000 in matching funds, and at no cost to Lapeer County’s general fund.
The deadline to file the grant application is late March, with grant award announcements expected to take place in November or December of 2020.
In past years, the grant writing application process had been left to Lapeer County Buildings and Grounds Director, Joe Stock, whose existing duties require most of his
time.
“We’re hoping that hiring a grant writer will improve our chances for a successful application,” Howell said. “Our grant writers are working hard on the application.”
He added that the grant writers are collaborating regularly with Stock and Polly Ann Trail Board member Tina Papineau as they prepare the 2020 application.
“Excellent progress is being made,” said Howell. “I am very optimistic that we will have a successful application this time.”
Howell noted that more than $100,000 in matching funds was raised in 2017; all of which remains in the Friends of the Polly Ann’s treasury.
Additional funds have been raised since through various trail rides, however, pledges made in 2017 must be renewed, including those from the Lapeer County and Four County Community foundations.
He added that the Friends group will be renewing its $25,000 pledge and Dryden Township has pledged $5,000 for this year’s grant.
Per the resolution approved by the Lapeer County Commission, Howell reiterated that Lapeer County is committing “no funds” to the project.
For further information about the proposed project, the grant application, or to make a donation to Friends of the Polly Ann, call 248-933-6184 or email to djhowell17@gmail.com