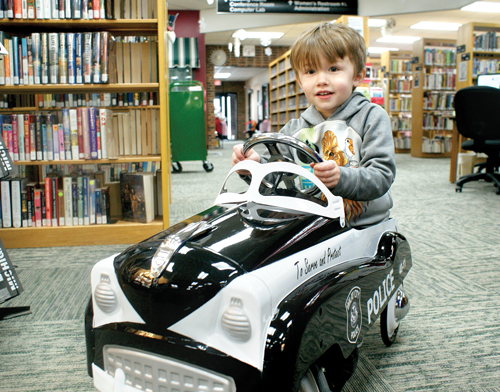 Landon Matson, 3, takes a ride in the ‘To Serve and Protect’ pedal Imlay City police car donated by Rebecca Homer, which was auctioned off during Ruth Hughes Memorial District Library’s 2020 ‘Love Your Library’ silent auction during the week of Feb. 5-12.

IMLAY CITY — Dozens of bidders took part in the Feb. 5-12 “Love Your Library” silent auction at the Ruth Hughes Memorial District Library.
While the final numbers are being tabulated, Library Director Tracy Aldrich estimates that about $4,500 will have been raised for the library during the auction.
Aldrich said this year’s most popular auction item, with a top bid of $200, was a pedal police car donated by Rebecca Homer of The Print Shop.
Rebecca, wife of late Imlay City Police Officer Kevin Homer, detailed the toy car with Imlay City Police Dept. insignias and decals.
Aldrich said other popular auction items included various vintage comic books donated by Jack Bostian; and a large gift basket donated by the Indigo Lavender Farms of Imlay City.
“It seems like every year there is a bidding war over who gets to take home the Lavender Farms basket,” said Aldrich. “There was also a great deal of interest in Jack’s vintage comics.”
Aldrich said the annual silent auction was moved from its former autumn date to February to coincide with Valentines Day.
“Valentines Day fits perfectly with our ‘Love Your Library’ theme,” she said. “And it’s a good time for people to come in from out of the cold and warm up inside our library.”
Aldrich thanked the many people who donated and bid on auction items.
“We are thankful and very grateful to everyone that supported our auction — whether they be donors or bidders,” she said. “Thanks also to (Library Board member) Cynthia Stroebel and the rest of our staff who worked hard to put this event together.”
Aldrich said money raised from the auction will go toward the library’s Storytime program; to purchase new items for collections; and for various maintenance projects.
The Ruth Hughes Memorial District Library is located at 211 N. Almont Ave. in downtown Imlay City.
For information about the Imlay City and Attica libraries, call 810-724-8043, or visit the website at www.ruthhughes.org