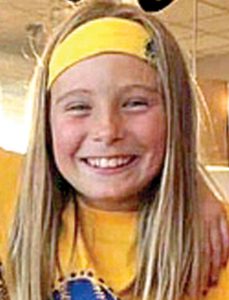 The community has already shown an outpouring of support for Michaela’s family by making donations and planning fundraisers.

IMLAY CITY — Eleven-year-old Michaela Wolford remains in critical condition with injuries she sustained in a Feb. 8 snowmobile accident.
In a show of support, a group of classmates, community and family members gathered Thursday (Feb. 13) afternoon at Imlay City High School for a prayer service.
Michaela, daughter of Imlay City Police Sgt. Tim Wolford and wife, Julie, has been in a coma at Hurley Medical Center since the accident, but is reported to be making incremental progress.
The 40-minute prayer session was hosted by Imlay City High School seniors Destiny Kreiner, 18, and Anna Gray, 17; who along with Gateway Church Associated Pastor David Krist, offered words of hope and comfort to those assembled.
Also present for the service were Imlay City Police Chief Scott Pike and veteran Police Officer Joe DeLuca.
Destiny said she believes prayer and faith are needed at all times; and especially in situations when someone’s life is in the balance.
“I’m here to pray for Michaela and to support her family, who are very important to our school and to our community,” said Destiny. “We believe that by keeping her in our prayers, that something good will happen.
“We pray that God will heal Michaela’s body and give strength and comfort to her family.”
Anna Gray, who said she knows Michaela’s brother, felt a need to do something that can be of help and support to the Wolford family.
“I feel the hurt for Michaela’s family,” Anna said. “This has hit me and a lot of us pretty hard.
“But I have deep faith and trust that something good will come from this,” said Anna. “There is always a reason for things and this has brought all of us together today.”
Family grateful
Last week, Tim Wolford said their family is so thankful for the overwhelming support they’ve been shown by the community.
“I have worked in Imlay City for over 30 years and the people in this community never cease to amaze me. The city and surrounding communities pull together when people are in need,” he said.
“I am astounded at the prayers and love that you have all shown our family.”
Wolford requested that supporters keep Michaela in their thoughts and prayers.
“We have a long road ahead of us. Her strength amazes me daily,” he concluded.

As of Tuesday, Feb. 18, a Go Fund Me page to support Michaela and her family had raised nearly $13,000 toward its goal of $20,000.
Funds raised from the Go Fund Me account will go to assist the Wolford family with medical bills and associated costs.
Other fundraisers are also proving to be successful.
Imlay City Police Chief Scott Pike said Tuesday that a hotdog sale fundraiser at the Imlay City Kroger store over the weekend collected about $5,000 for the family.
He added that a separate account for “Michaela and the Wolford Family” has been set up at Security Credit Union’s Imlay City branch.
Grondin’s Hair Center in Imlay City will host a Cut-A-Thon, 2052 Cedar St., on March 15 from 12-4 p.m. for a $10 donation.
CJ’s Hunting Shack and Lumberjack Shack are also hosting chainsaw and rifle drawings to benefit the Wolfords.