Keihin to shut down

CAPAC — A little more than a month ago, management and employees at Keihin Michigan Manufacturing (KMM) were hopeful that a merger with Honda and Hitachi would ensure the local plant’s future.

That sense of optimism melted away on Monday, February 3, when KMM management announced during an associate meeting that the Capac plant will be shutting down in one year. 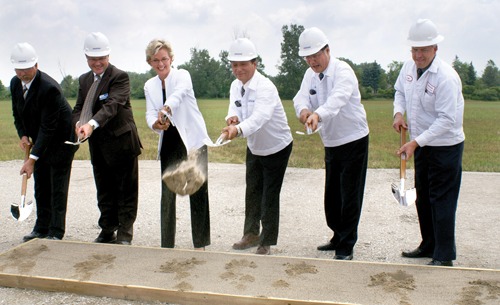 The press release cited “sales reductions” and “dramatic changes affecting businesses in the automotive industry” as reasons for the plant’s closing.

While deferring to the language in the press release, Capac Keihin Plant Manager Bo Shirling has confirmed publicly that about 165 employees will be affected by the plant’s closing.

The following excerpts were taken from the corporate press release.

“Even with the strong and steadfast efforts of associates through the organization, especially those at our Michigan facility. we have not been able to expand our business as quickly as hoped, giving us no other recourse but to proceed with this unfortunate business decision.”

The press release indicated that giving employees a year’s notice of the impending closure can provide them ample opportunity to make the transition.

Additionally, KMM Capac associates will be provided severance packages to include a “transitional” medical benefit and outplacement services.

“We hope to minimize the impact to our valuable partners,” the company stated. “With this support, we are confident we can assist our associates with this difficult transition.

“We are thankful for the opportunity to have been a part of the Village of Capac and St. Clair County communities for the last 12 years.”

Reports of the merger of Honda Motor Co. and Hitachi Ltd. were first reported in late 2019 by Bloomberg News.
Those reports indicated that Honda and Hitachi had agreed to combine their affiliates, Keihin Corp., Hitachi Automotive Systems, Showa Corp., and Nissin Kogyo Corp.; to form a $17 billion components supplier.

The terms of the merger resulted in in Hitachi owning two-thirds of the new entity, with Honda owning the rest.

At the time, the merger was viewed by some experts as part of a global wave of new partnerships due to shifts in the marketplace resulting from an increased emphasis placed on electric and autonomous vehicles.

The Wall Street Journal added credence to that opinion in late 2019, when they reported that Toyota Motor Co. had increased its stake in Subaru Corp., while simultaneously establishing ties with smaller rival companies, Suzuki and Mazda.

According to sales reports from Honda, sales of the Civic remain strong but the brand’s truck models are currently setting sales records.

Keihin Michigan Manufacturing has been in operation since 2008. At the start, the plant was making intake manifolds and HVAC systems for several Honda models, including the Civic and Accord.

The Michigan Economic Development Corporation provided funds through their Community Development Block Grant program to help cover costs associated with the new plant’s infrastructure and road improvements. In subsequent years, the company sought and was granted an Industrial Facilities Tax exemption and Personal Property tax exemptions by the village.

The Capac facility was Keihin North America’s only Michigan-based plant and one of the group’s newest manufacturing facilities. According to the company’s website, the company maintains operations in Ohio, Indiana and North Carolina as well. There is no indication or news reports of any other Keihin North America facilities being shuttered as part of the merger.