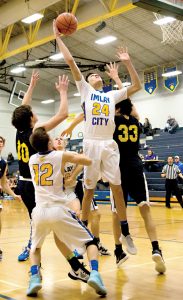 Imlay City’s Hunter Medrano goes up for a shot in Friday’s game versus Algonac. Photo by Rod Soule

In Friday’s meeting, Imlay City bolted out to an 18-6 advantage after one quarter was done and widened the gap to 50-17 at halftime.

When the action resumed, Imlay City further distanced themselves from the opposition. Thanks to an 11-1 third quarter edge, the Spartans forged a 61-18 cushion with 24 minutes gone.