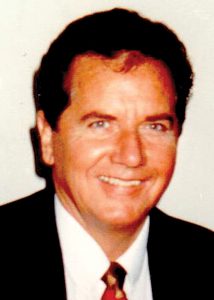 Gordon C. Campbell, 82, of Rochester, MI passed away peacefully on Monday, January 27, 2020. Gordon was born on August 8, 1937 in Flint, MI, the son of the late Russell and Bessie (Darling) Campbell. He was raised in Almont and graduated from Almont High School in 1955. Gordon proudly served in the United States Army from 1956 to 1958. Gordon was united in marriage to Mary “Jean” Ligon on March 26, 1966 and they raised three wonderful children.

Gordon was preceded in death by his parents, sister Dorothy, and brothers Robert, Richard, James and George.

He is survived by his children, Brad of Kalamazoo, Mary (Doug) McNabb of Viro Beach and Andrea (Steve) Zamansky of Dexter. He is also survived by his brothers, Gerald (Sherrie) Campbell of Almont, Donald (Barbara) Campbell of Lewes, DE and Bruce (Sally) Campbell of Midland. Also surviving relatives in California, Louisiana, Delaware and Michigan.

Gordon was an articulate, happy, generous and fun loving Christian person. He was very proud to know that his children became very successful at their endeavors in life. Gordon finished his working career at the Beaumont Hospital Health System in Environmental Services. All of his new acquaintances easily became lasting friends. He decorated his home with quality historical remembrances, which was his passion. He is sadly missed by all who knew him.

Gordon would agree that the musical rendition of “Star Dust” lives forever in the Campbell family memory. A lasting observation from Gordon would be, “Keep your religious beliefs intact and live life fully. Be happy and humorous and love your family and friends throughout eternity.”

Gordon’s remains are interred in Hough Cemetery, Almont which, originally was part of the farm on which Gerald and Sherrie Campbell now live.