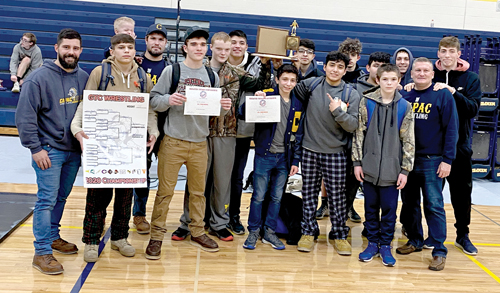 The Capac wrestling team takes time out for a picture after the GTC Tournament. The Chiefs share the league title with Caro.

With their showing, Capac (which won the dual portion of the conference standings) shares the league title with tournament champion Caro.

Nathan Schocke, Shane Hofmann and Derek Mason led Capac with firsts that day. Schocke reached the 119-pound title match where he pinned Memphis foe Dakota Strickland with 4:39 elapsed; Hofmann advanced to the championship encounter at 125 pounds where he posted a 6-2 win against Brown City’s Cameron Gottschalk; and Mason gained admittance to the 130-pound title match where he picked up a 9-4 victory over Cass City’s Drew Markel.

Jeff Helzer had the other Capac placewinning effort, registering a fourth at 103 pounds. His final bout ended with a loss by pin with 2:39 gone to Cass City adversary Hunter Turnbull.