TRI-CITY AREA — The 2020 road work season is shaping up to be rather light but that’s on track to change dramatically in 2021 when the state will undertake several projects locally. 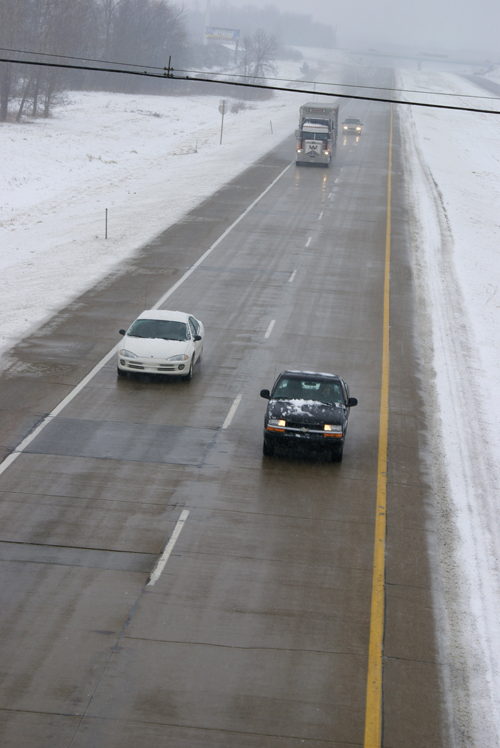 Next year, MDOT plans to rehabilitate I-69 from the Newark Road overpass to the Lapeer/St. Clair County line. Shown here is westbound traffic at the Blacks Corners Road overpass in Imlay Twp.

The timing and funding for several of those projects has been tweaked since more than $3 billion in “Rebuilding Michigan” bond funding was proposed by Governor Gretchen Whitmer last month and has since been approved by the State Transportation Commission.

Recently added to the list is rehabilitation of I-69 from the Newark Road overpass to the Lapeer/St. Clair County line.

Jocelyn Hall, communications representative for the Michigan Department of Transportation, said that 2021 project is valued at $36 million and will encompass all lanes of traffic.

“This work is best described as a heavy maintenance. We won’t be rebuilding the entire road, but we will be adding several layers of new pavement and drastically improving the ride quality,” Hall said.

Two other local I-69 projects, already slated for repairs, have now been designated as bond projects and being able to allocate those funds to existing plans has allowed MDOT to “backfill” their regular maintenance program with new jobs.

Those existing projects slated to get bond dollars are the 2021 reconstruction of I-69 from the Cox Doty Drain in Mussey Twp. to M-19 and the 2022 rebuild of I-69 from Lake George Rd. in Attica Twp. to M-24.

Although the St. Clair County project is listed on some maps as a 2020 project, Hall confirmed the 2021 date hasn’t changed.

The Lapeer County
rebuild project has been accelerated, having originally been on the 2024 calendar year list. Conversely, MDOT has delayed their plans to rebuild the rest area in Attica Township in 2020 and have now combined it with the 2022 road project.

In addition to those two major interstate projects in 2021, Hall confirmed MDOT also has plans to do resurfacing work on M-53 in the city of Imlay City, stretching from Newark to Capac roads. That work is valued at $1.3 million.

In St. Clair County, there are a handful of road projects slated for 2020, most notably, the final reconstruction phase of Capac Road in Berlin Township. This time the work will encompass the area from Hough Road, south to the Macomb County line. Last fall, crews reconstructed the busy road from Terry to Hough roads.

Currently, plans call for the work to start in June and wrap up in October. The project’s expected to cost $1.05 million.

Elsewhere in the Tri-City area, the county road agency plans to resurface Sterling/Mason Road between Capac and Yale roads in Lynn Township.

The project, estimated to cost $145,000 for both roads, should start sometime in June. The work will be completed by Highway Maintenance Co.

Culverts due to be replaced include those on Bailey Road in Lynn Township, Knoll Road in Mussey Township and Almont Road in Berlin Twp. The cost
for those projects are shared between the road commission and townships.

The Lapeer County Road Commission will center their efforts in the eastern half of the county on General Squier Road in 2020.

They’ll rehabilitate it between Bishop and Rochester roads in Dryden Township and then put down an overlay in three phases from Bishop Road to the village of Almont.
Destain Gingell, c
ounty highway engineer, reports that one 2020 project is already complete—tree work on Dryden Road from Rochester to Gardener roads in Dryden and Metamora townships.