The educational program, which was open to the public and attended by dozens of parents, school officials and community members, concluded Almont Primary School’s fourth grade biographical studies unit. 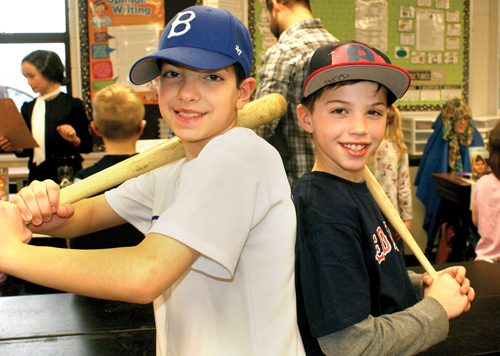 Teacher Julie Saintonge explained that each student selected and researched a specific person who had made an impact on the world around them.

“After reading and learning all about that individual,” Saintonge said, “they created an informational poster, a speech and a ‘magic button,’ that when touched, would transform them from wax figures into live, speaking people.”

To enhance the experience, the students attired themselves in costumes consistent with those of the famous person they were portraying.

Saintonge said the students were eager to participate in the Wax Museum and that the response among visitors was particularly positive.

“It was open to everyone and it was a huge success,” she said. “Our students did a fantastic job and the number of visitors in attendance surpassed our wildest expectations.”

Nine-year-old Ronan Gowing, who took on the persona of Benjamin Franklin, said the project turned out to be a learning experience that he enjoyed being part of.

“I learned that Benjamin Franklin came from a large family and had 16 siblings,” said Ronan. “He also started making newspapers when he was only 12 years old.

“He was very creative and he invented a lot of things before he died at the age of 86,” Ronan concluded.

Orchard Primary Principal Jennifer Szlachta said she was impressed with the work and effort each of the students put into their respective projects.

“It was a phenomenal event and one that the kids really got involved,” Szlachta said. “They invested a lot of time and thought into researching the famous person, and put a lot of detail into preparing their speeches and creating their costumes. It was truly amazing.”

Moreover, Szlachta observed the personal satisfaction each student appeared to take from the experience.

“One of the things I noticed was the enthusiasm and great pride the students took in this project,” she said. “I think they were all very proud of themselves, and it showed.”

Szlachta also acknowledged and thanked all those who took the time to attend the Wax Museum and support the students and the school.

“It is very meaningful to the kids to have their parents and others come to the school to see what they are doing,” she said. “Showing that kind of support is very important to them, and to all of us at Orchard Primary.”