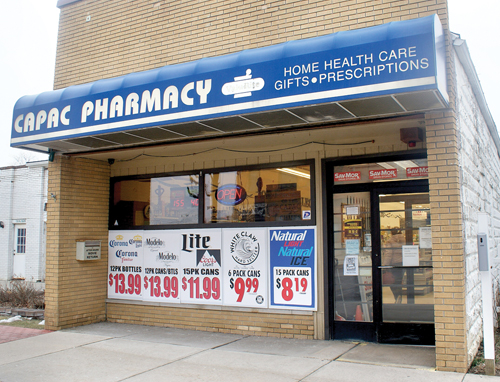 A fixture in downtown Capac for decades, the Capac Pharmacy at 136 N. Main St. has closed its doors. Pharmacy owner Scot Sheldon said the building is now available for sale or lease.

CAPAC — After more than two decades of filling prescriptions and meeting other medical needs for the local community, Capac Pharmacy at 136 N. Main St. closed its doors to the public yesterday, Tuesday, Feb. 4.

Business owner Scot Sheldon, 58, who has owned the Capac pharmacy for 23 years, said he will continue operating his Sheldon SAV-MOR pharmacy in downtown Yale.

Sheldon blamed the current state of the medical insurance industry and exorbitant costs for the demise of his Capac facility.

“The industry is making it nearly impossible for a small town pharmacy to sustain and survive,” said Sheldon. “We’ve been losing money, so now I’m having to scale back.”

He regrets letting down his many loyal customers, but hopes a new arrangement with CVS Pharmacy of Imlay City will continue to fill their prescription needs and services.

To accommodate his former regular customers at the Capac store, Sheldon said patient’s prescription information and records are being transferred to the CVS Pharmacy at 2040 Cedar St. (M-53) in Imlay City; thus ensuring as smooth a transition as possible.

“CVS is being helpful and very fair with us,” said Sheldon, adding that there should be no lapse in his former customers getting their prescriptions filled.

Sheldon acknowledged his Capac customers and the community at large for their long and loyal support.

“I could not have asked for better people to serve or a better community to operate,” said Sheldon.

“They have been great, but I just couldn’t keep it going any longer.”

Meanwhile, he said the approximate 5,000-square-foot building in downtown Capac will be available for purchase or lease, but not for use as a pharmacy.