IMLAY CITY — Dirt won’t be turned for some of the bigger projects until 2021 but the wheels are now in motion for many of Imlay City Schools bond projects.

Bid packages and timelines have been developed by the district’s project manager Barton Malow and the latest information was shared with board members at their regular meeting on Monday, January 27.

Those plans call for tackling smaller projects before diving into major construction work, specifically building a classroom addition at Weston Elementary School and a performing arts center at the high school. 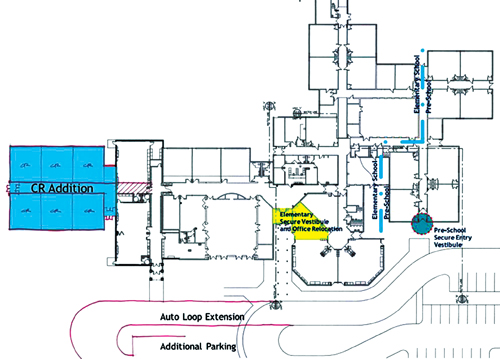 The construction of a six-classroom addition at Weston Elementary is expected to start in March 2021 and be complete in time for the 2021-2022 school year.

The plan, said Barton Malow’s Daryl Dombrow, is to start the design phase for both of those new builds this month, February 2020, and then start the bid process in August for the classroom addition and September for the performing arts center.

They anticipate starting construction of both in March of 2021 with the Weston project to be complete by August of that same year. The performing arts center is due to be complete sometime the following summer of 2022.

In the meantime, the district will take possession of 11 new school buses and complete cabling and network upgrades before the new school year begins in August.

The board approved spending $1.03 million on the purchase of 11 buses from Hoekstra Transportation. The new fleet additions will include nine general education buses, one special education bus with wheelchair stations and a lift and one ‘flatnose’ bus with a luggage compartment.

This summer
contractors will be on the school campus to start work on secure entrances, video surveillance, classroom door hardware replacement, paving projects, fire alarm upgrades, interior and exterior lighting and more. Some of that work could extend into the 2020-2021 school year but with minimal disruption to the school day, Dombrow said.

Michael Barry of PFM also spoke about the bond sale process, noting that the actual sale was due to take place this week.
Barry said his company’s financial advisors will work to keep those bond funds safe, accessible and add some return by building an investment portfolio with maturities that align with bond project payments.

Barry said anticipated net earning on the bond investments is just over $900,000.

Supt. Dr. Stu Cameron said that in order to take advantage of low interest rates, the bond series has been structured so the bulk of the bond revenue will come in the first of two series.

“This provides the best opportunity for the district to save taxpayers money over the life of the bond,” Cameron said.

In November 2019, voters approved a 20-year, $36.8 million bond request. School leaders described the measure as a ‘no tax rate increase’ as the funding would amount to the continuation of the 6.5 debt millage rate due to expire.