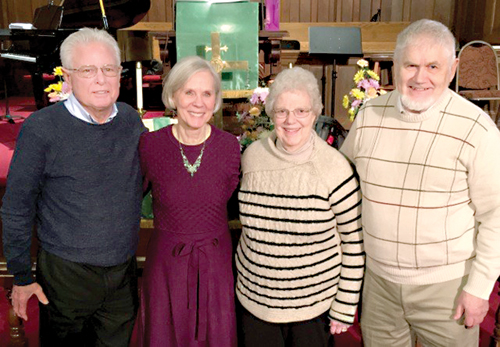 Last December, my husband and I booked the April tour titled Country Roads of Scotland to celebrate our 50th Wedding Anniversary, January 24, 1970.

I know what you’re thinking. Who in their right mind would plan and host a January wedding in Michigan?

Two young people in love during the Vietnam War. 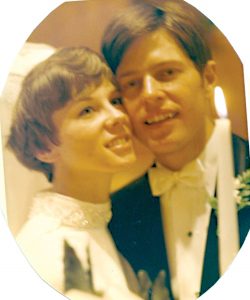 Mel and Iris Underwood were married during a January 1970 snowstorm.

While a snowstorm buried Mel’s 1966 Mustang in my church’s parking lot, we exchanged vows before the stained glass window where Jesus prays in the Garden of Gethsemane.

Three daughters and several moves later in 1976, Mel and I met David and Marianne in the church where we worshiped twenty years.

Our first visit to the their home, David set up their family movies. Marianne laughed as she watched herself open one bridal shower gift after another.

“Real exciting, isn’t it?” she joked.

Continuous hardships of rearing children turned our feet upon demanding paths. We lost touch with Dave and Marianne after our firstborn’s death in 1996. We left our church in search of healing and a new congregation.

Long last, our season of solitude and prayer for a place to worship concluded almost two years ago within a sanctuary in Romeo.

January 19, the Sunday service before our Golden Anniversary, my husband stood in answer to the pastor’s request for praises. To my surprise, Mel said, “I’d like to thank God for five decades of wedded bliss to my lovely wife on January 24, 1970.”

After the service, many congratulations followed with the last unfolding something like this from Bob.

“Well, that’s very interesting because Carol and I have never met a couple who share our wedding date. “

“There aren’t many of us crazy people around, Bob.”

“I didn’t speak up because I’m waiting until next Sunday.”

“Where were you married?” I asked.

“A fraternity brother from GMI fixed us up,” Bob said.

“Where did you spend your honeymoon?” I asked.

“I can’t believe this! That’s where we went on our honeymoon!”

In the spirit of hilarious discovery, Carol disclosed Bob left her at the top of the highest hill to fend for herself. She wiped out on the slope.

“A Ski Patrol came to my rescue and assisted me downhill.”

“That’s exactly what Mel did to me!” I said.

“Well, the hill didn’t seem that high until we got up there,” Bob defended.

Today, the following Sunday, with the flair of a bard, Bob related his thanks for fifty years of wedded bliss. Then confessed he abandoned his bride at hilltop for the thrill of racing downhill.

Dear Reader, we celebrate the endurance of young love. We’ve lived to tell our stories of January 24, 1970–crazy couples blessed with golden anniversaries.

Would love to see David and Marianne again.