Imlay City opened their two-match stint with a 42-33 win against Almont.

Dakota Sandzik and Austin Torres were the other Imlay City grapplers who prevailed. Sandzik notched a 7-6 triumph against 125-pound counterpart Aiden Finn and Torres posted a 3-2 win over Gavin Dempz at 135 pounds.

Dallas Stanton added a triumph by decision to Almont’s cause. He defeated 112-pound adversary Mason Wildie, 8-4.

A group consisting of Wildie, Cristian Rojas and Torres tacked on victories by decision to Imlay City’s cause. Wildie made Emmet Kettle absorb a 7-4 loss at 112 pounds; Rojas handed 130-pound adversary Josh Barton an 8-6 setback; and Torres registered a 4-2 triumph against Austin Bergeon at 135 pounds. 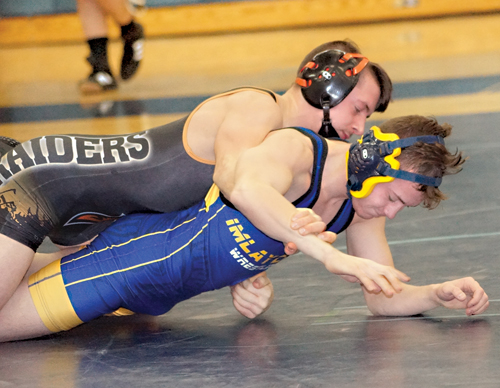 In the night’s other dual involving a Tri-City squad, Almont dropped a 56-16 verdict to Cros-Lex.

Dempz led Almont with a win by pin against Jack Oliver at 130 pounds. His fall time was not available.

A group consisting of Maria Stanton, Dallas Stanton and Dwyer added victories by decision to Almont’s cause. Maria Stanton posted a 7-0 triumph against Brady Seaman at 103 pounds; Dallas Stanton obtained a 10-0 win over 112-pound foe Jaxon Gonzalez; and Dwyer handed Miguel Puebla a 14-8 setback at 152 pounds.