Magazine photos in need of names

IMLAY CITY — Can you hear me now? The Imlay City Historical Museum hopes our readers can help them identify the people and places pictured in these unique photos dating back to 1949.

That’s the year a photography crew and writers from Life magazine came to Imlay City for a feature story about the Imlay City Fire Department.

One of the photos they took during that visit depicted what it took to dispatch firefighters when they were needed.

A team of telephone operators are seen sitting in front of a switchboard.

“Back then the alarm was set off manually and the switchboard operators would contact each fireman,” said the museum’s Marilyn Swihart. 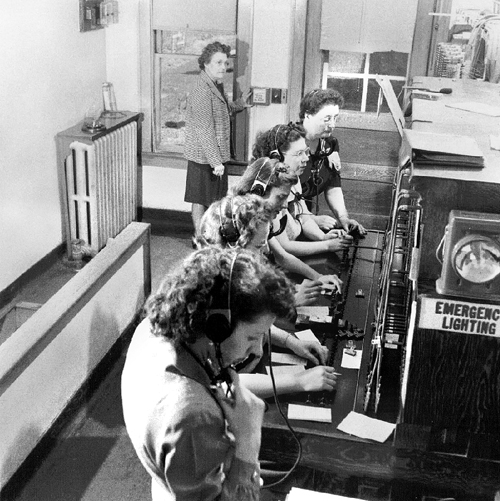 Local historians hope to identify the two women in the foreground of this photo taken in Imlay City in 1949. Orpha Weston, a supervisor, stands in back, while Gerry Harris, Evangeline Trumble and Mary Sherwood (seated from top left) operate the phone lines. It was their job to notify each fireman when emergencies arose.

Those already identified in the photo are Orpha Weston (standing in back), and at the switchboard, seated from left, operators Gerry Harris, Evangeline Trumble and Mary Sherwood.

“The unidentified lady standing at the far end of the switchboard (in the foreground) is believed to be a supervisor, and the other woman operator further down the line (to her left) is unidentified,” Swihart said.

Local historians would also appreciate knowing just where the telephone office was located. Swihart said they believe the backroom of a storefront on Almont Ave. was likely utilized for this important service but they don’t know exactly where.

The museum would also like to know the identity of the woman in a second photo shown sitting on the hood of an Imlay City Fire truck.

The photos belong to a collection of Imlay City Fire Department items in the possession of the Imlay City Historical Museum. Besides photos, the museum has fire gear, a plaque honoring members of the department’s 25 Year Club and more. They were featured in a special ‘Meet the Heroes’ exhibit at the museum last spring.

If you can identify any of the people pictured or know the location of the telephone office, please contact the Tri-City Times at 810-724-2615 or tct@pageone-inc.com.