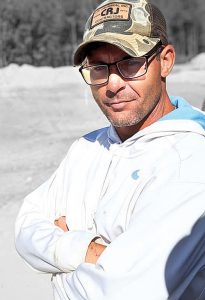 He is survived by his father, Robert Mack, and his mother, Debra (Schunck) Mack, of Lexington, SC; brothers, Michael Mack of Almont, MI and Steven Mack (Kara) of Lexington, SC; grandparents, Sherwood and Sandy Schunck of St. Clair, MI; nieces, Veronica and Farrah; and many aunts,
uncles, cousins and friends.

He was preceded in death by his grandparents the late John and Grace Mack; and sister, Melissa.

Robert attended and graduated in 2002 from Almont High School where he was a standout student-athlete and earned 12 varsity letters in football, wrestling, baseball and track. He went on to earn a degree from Central Michigan University in Business. Robert moved to South Carolina in 2015 and worked in the construction field where he also shared a home with his longtime girlfriend, Nicole Beswick.

Robert was a funny, tough, loyal, smart and honest person that had the brightest blue eyes, a laugh and a smile that would captivate any room he was in.

We want to celebrate his life with a memorial on Saturday, February 1, 2020 at the Berville Lions Club from 5-7 p.m.