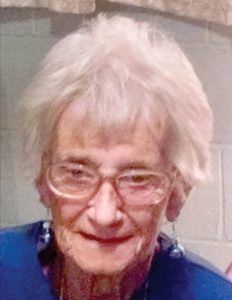 Lucille Brinker, age 85, of Imlay City, MI died Saturday, January 18, 2020 surrounded by her loving family at her daughter’s home in North Branch. Lucille Margaret Brinker was born March 3, 1934 in Capac, MI. She was the daughter of the late Leonard and the late Margaret (Gibbs) Creger. Lucille grew up in Almont and was an Almont High School, Class of 1952, graduate. She married Elmer Peter Brinker on February 23, 1957 in Imlay City, MI. Lucy and Elmer have lived in Imlay City from the time they were married until just after Elmer passed away.

She was employed by Imlay City Community Schools for 20 years. She worked at Weston Elementary School – Imlay City as a Teacher’s Assistant and Playground Manager.

Lucille loved to play Bingo. She would go to bingo nights all over (from Sarnia to Flint and beyond). She enjoyed watching and feeding the deer and the birds in her backyard, especially the hummingbirds.

Lucy was preceded in death by her husband, Elmer Brinker (September 27, 2019); her parents; and her two brothers, Robert Creger and David Creger.

Funeral arrangements were made by Muir Brothers Funeral Home of Imlay City.

Please be sure to sign the online register book at muirbrothersfh.com to share memories and condolences with the Brinker family.