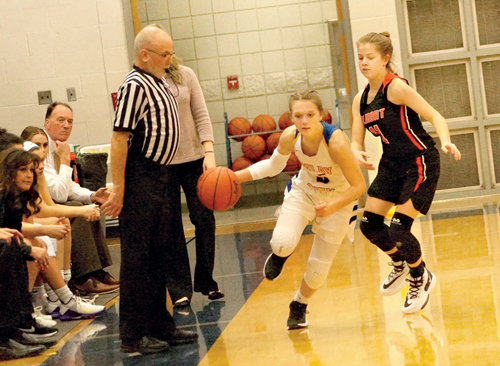 Imlay City’s Jaya Forti brings the ball up the floor as Almont’s Grace Johnson pursues during their team’s BWAC matchup this past week.

In Tuesday’s meeting, Almont took a 9-6 edge after one quarter was over with.

Imlay City then bounced back with a 12-4 second quarter advantage, good for an 18-13 lead at the halftime break.

When the action resumed, Imlay City picked up where it left off. Aided by a 12-5 third quarter edge, the Spartans went up 30-18 with 24 minutes gone.

Imlay City followed it up with a 9-8 fourth quarter advantage, putting the finishing touches on a 39-26 win.