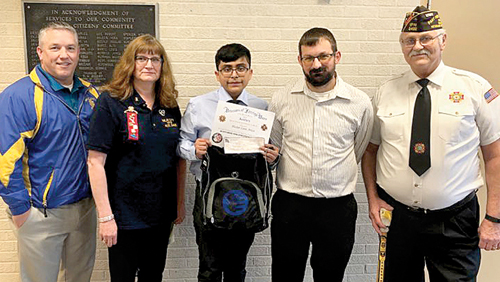 An eighth-grader at the middle school, Hector is one of only 14 students statewide whose “What Makes America Great?” essays will be moving on to the state competition.

On Sunday, Jan. 12, Hector competed at the District competition at VFW Post 1452 in Clio, where he earned first place honors; taking home a certificate, a VFW backpack and a check for $300.

LaMarra said the VFW’s Patriot’s Pen contest is open annually to middle school-age students, whose 300-400 word essays are best able to articulate the given year’s theme.

He noted that of the 142 Imlay City students to submit essays for the local (Imlay City) competition, there were six local winners (including Hector), who were awarded $50 checks and the chance to compete at the District competition. Others were Aileen Hernandez, Jay Jurcak, Jeffery Francis and Andraya Schwanke.

They included Jonathan Broder, Austin Torres, Grace Schriber, Ruby Hellebuyck and Timothy Ellis; each of whom collected $50 checks from the VFW and the chance to compete in the District competition.

The longtime coordinators of both annual student essay competitions at Imlay City VFW Post 2492 are Rosemary and Butch Earehart.

Regardless of who wins the state essay competitions, LaMarra is proud of Hector, and of all the Imlay City students who expressed their patriotism by submitting essays.

“Whoever wins the state competition gets to compete at nationals in Washington D.C. in the spring,” LaMarra said. “Congratulations and best of luck to Hector this weekend at Kalamazoo.”