IMLAY CITY — With the Imlay City Chamber of Commerce Dinner-Dance just days away, the Chamber Board has announced its award recipients in advance of the 2020 Gala at Castle Creek Golf Club on Saturday, Feb. 1.

The winners include Citizen of the Year: Ron Rickard; Merit Award: Barb Yockey and Frank Demske; and Organization of the Year: Ag-Community Relief.

The honorees will be acknowledged during the Dinner-Dance, which includes dinner, and open bar and live entertainment after the awards presentations.

The doors will open at Castle Creek Golf Club at 5:30 p.m.

Citizen of the Year, Ron Rickard, has been a fixture in the Imlay City community for a half-century. 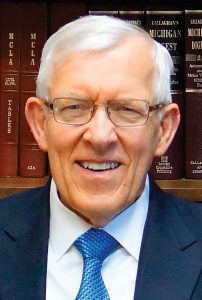 An Imlay City Rotarian for 45 years, Rickard has served as Rotary president; as a Paul Harris Fellow; and as a member of the Rotary’s Hall of Fame.

A longtime attorney, dedicated community volunteer and former Imlay City Board of Education president, Rickard has been an integral leader during both good and trying times.

His tireless involvement with Zone Productions and Lapeer County’s “Young Life” program exemplifies his commitment to helping and supporting the young people of Imlay City and those throughout Lapeer County.

Dana Walker, a friend and fellow Rotarian who nominated Rickard for the Citizen award, offered personal perspective as to his character.

“I have personally witnessed him speak to defend the underdog and express a view while others remained silent,” said Walker. “Ron completes his tasks with a smile and a sense of humor.

“He is a true leader for he stands behind his words with actions. He thinks of others before himself and he leads by example and with integrity.”

As members of the Imlay City Chamber of Commerce, Downtown Development Authority and Imlay City Commission (Demske), the married duo has taken on various tasks and leadership roles over the years.

From Barb’s downtown law practice to the couple’s shared sponsorships of community events (such as serving as announcers for the former Blueberry Festival Parade); to their impassioned support of the Friends of the Polly Ann Trail group, Barb and Frank have been quietly making their mark in Imlay City.

Walker, who also nominated this year’s Merit Award winners, credited Yockey and Demske for their active participation, valuable opinions and commitment of their time and energy.

“As residents of downtown Imlay City, they understand the importance of giving back, for apathy does not improve a town,” said Walker. “Barb and Frank truly deeply love the community of Imlay City, as proven by their actions and achievements.”

Rounding out this year’s Chamber of Commerce award winners is Ag Community Relief, to be honored as the Organization of the Year.

In recent years, the organization has supported and raised money on behalf of farmers and ranchers in the aftermath of floods, fires and natural disasters.

Ag Community Relief has used its resources to truck hay, grain and supplies to affected areas; sometimes using personal and vacation time to help their fellow farmers in times of need.

Nominee Randy Jorgensen noted the organization’s unselfish spirit, community values and many examples of kindness as being worthy of acknowledgment.

“This group has gotten a great deal of national recognition for their efforts and has helped other organizations to do similar acts,” said Jorgensen.

Now that the winners have been announced, Hamel invites all of the honorees’ friends, families and residents to join in the fun on Sat., Feb. 1.

“We hope everyone comes out to celebrate and congratulate our new Citizen, Merit and Organization of the Year award winners,” said Hamel.

Tickets for the Chamber Dinner-Dance are still on sale at the Imlay City Hall for $50 per person, or $380 for tables of eight.

“Come dance the night with us,” she says. “But make sure to get your tickets soon — as we have only a limited supply remaining.”