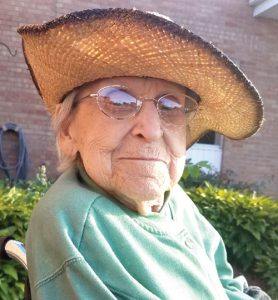 Mimi Rheaume, age 98, of Imlay City, Michigan died Friday, January 3, 2020 at Villages of Lapeer, MI.  Mary Priscilla Zvanciuk was born July 27, 1921 in Cupar, Saskatchewan, Canada. She is the daughter of the late John and the late Anita (Banchiu) Zvanciuk.  Mimi grew up in the Detroit area. She is a high school graduate. Mimi married Lawrence Rheaume on July 25, 1943 in Detroit, Michigan.  They lived in several different communities in Michigan: Dearborn Heights, West Branch, Lupton, and Sage Lake.

Mimi had a spirit like no other.  Her heart was so full and generous she touched everybody around her from her loved ones to the boy bagging her groceries.  She made everyone feel seen and important. She was dedicated to human and animal rights, making charity and volunteering a high priority always.

Mimi was a classic Donna Reed mother: shirtwaist dresses, homemade cookies, singing, sewing, and she married her sweetheart Larry who was the only love of her life.  She modeled what a loving relationship looked like for us all. And she loved the Lord Jesus. Her faith was grounded in generosity and love without boundaries.  In addition to her stellar career as a homemaker, she volunteered for the Chamber of Commerce, Seven Ponds Stingers and church functions as well as gave to myriad charities even when times were tough.  She was proud of her Romanian heritage and taught us all the rich history of our family`s journey. She was simply beautiful–inside and out.

But that wasn`t all that Mimi was.  She was also spunky, clever and hardy.  She had a sense of humor and was always game for adventure. She loved her yearly vacations with her daughter, camping in the Canadian wilderness.  When a surgery took her gorgeous voice away, she just started dancing.  Her line dancing classes at Imlay City Senior Center were so popular they blossomed into Capac and Yale Centers as well. She loved vampire movies and a good scare. And there was serious determination, too:  having had to quit school to work in a factory at age 14 during the depression, she never gave up the dream of an education.  She graduated with a full High School diploma at the age of 70 and never stopped educating herself. The world was lucky to have her for 98 years. She will be sorely missed by her many nieces and nephews, friends, and also the loving staff and residents of The Villages Nursing Center. Go in Peace, Mimi, we love you dearly.

Mimi was preceded in death by: her husband: Lawrence Rheaume; and her brother:  Alex Vifor.

Cremation has taken place. The family is planning a memorial service for late spring or early summer.

Arrangements were made by Muir Brothers Funeral Home, 225 N. Main Street, Imlay City, MI.  Please be sure to sign our on-line register at muirbrothersfh.com to share condolences and memories with the family.

Sent from Mail for Windows 10