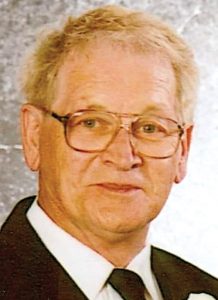 Kenneth Lockwood, age 81, of Imlay City, MI died Tuesday, January 7, 2020 at his home surrounded by his loving family. Kenneth Lockwood was born May 9, 1938 in Almont, MI. He was the son of the late Harry Ralph and the late Mildred Josephine (Warner) Lockwood. Ken grew up in Almont and he was a graduate of the Almont High School Class of 1957. Ken married Lea Joan Delannoy on September 3, 1962 at the First Baptist Church of Imlay City, MI. They moved to Goodland Township and have lived there their entire married life.
Ken proudly served in the U.S. Army, Second Howitzer Battalion 36th Artillery at Fort Sill, Oklahoma during the Cuban Missile Crisis (from 09/29/1961 to 09/27/1963), and Company K, 3rd Battalion in Flint during the Vietnam War (until 1967). Ken was employed as a Line Technician at the General Motors Fisher Body Plant and then the Orion Plant for 32 years. Ken retired in 1995.
Kenneth was baptized in 1970 and was an active member of the Imlay City First Baptist Church where he served on many boards and committees. He was always pleased to be able to serve in church with his son and daughter. Ken was a member of the Lapeer Breathers Club for 15 years, receiving pulmonary therapy and sharing camaraderie with the other members of the Club as they struggled for a breath of fresh air. Ken was a very good bowler; he enjoyed bowling and bowled on the Holy Rollers leagues at Cedar Lanes in Imlay City for many years.
Ken liked to hunt, fish, camp, travel and care for his yard around his home.
Ken is survived by his wife of 57 years, Lea Lockwood; his son, Gregory Lockwood of Imlay City, MI; daughter, Lisa Lockwood of Yale, MI; sister, Shirley Dietlin of Romeo, MI; a sister-in-law, Ruth Delannoy of Imlay City, MI; and his stepbrother, Edward Miles of Caseville, MI. Ken was also survived by several nieces and nephews. Ken was preceded in death by his parents, Harry and Mildred Lockwood; a brother, Ralph Lockwood; sisters, Donna (Chuck) Johnson, Marilou (Gilbert) Lecluyse, and Dora (Richard) Hill; nieces, Rose Marie Johnson and Sheryll Lyynn Hill; stepfathers, Earl Miles and Clarence Hill; stepbrother, Chuck (Joan) Evans; and his brothers-in-law, Duane Dietlin, Roger (Suzanne) Delannoy, and Lee Delannoy.
The funeral service was held Friday, January 10, 2020 at Muir Brothers Funeral Home of Imlay City, 225 N. Main Street, Imlay City, MI. The Reverend Jeffrey Dufour officiated. Burial followed in Goodland Township Cemetery, Imlay City, MI.
Those wishing to make memorial contributions may direct them to Crossroads Baptist Church of Imlay City, 6835 Weyer Rd., Imlay City, MI 48444.
Please be sure to sign the online register book at muirbrothersfh.com to share your memories and consolations with the Lockwood family.