CAPAC — Keihin Corporation, which includes the company’s Keihin Michigan Manufacturing LLC plant at 14898 Koehn Rd. in Capac, is in the process of merging with the Japanese companies, Honda Motor Co. and Hitachi Ltd.
According to Bloomberg News, Honda and Hitachi recently agreed to merge four of their car parts businesses to create a components supplier with almost $17 billion in sales.
Specifically, Honda and Hitachi are in the process of combining Hitachi Automotive Systems and Honda affiliates Keihin Corp., Showa Corp. and Nissin Kogyo Co.
Under the terms of the merger, Hitachi will own two-thirds of the new entity, with Honda owning the rest.
As a result, the companies appear to be joining a wave of partnerships taking place in the global marketplace. 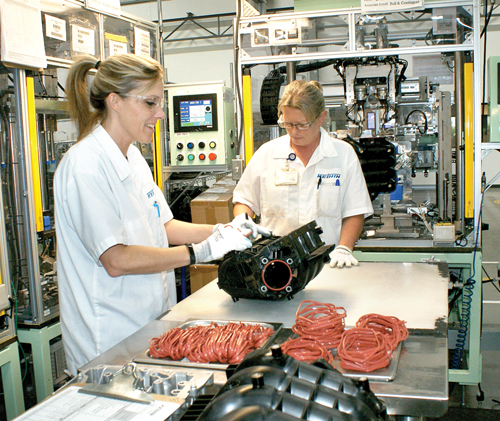 Keihin employees are shown demonstrating their skills for groups of visiting Capac High School students during a recent Manufacturing Day educational program at the plant on Koehn Rd.

With the ongoing shifts toward electric vehicles and autonomous driving, industry experts say automakers and their suppliers are finding themselves in the position of seeking allies to pool resources.
Some auto manufacturers are reporting slumping demand for conventional vehicles, along with uncertainty about which technologies and businesses will prevail over the long term.
Capac plant’s future
Capac Plant Manager Bo Shirling believes the impact of the merger will not likely be felt until later in the year.
However, he is optimistic that any changes to come will help ensure the organization’s future stability and result in continued longterm success for all participating entities.
“I believe many stakeholders become uneasy anytime there is a merger,” Shirling said. “But many of our associates at KMM are viewing this as a positive move.
“We look at this as beneficial to the overall Keihin organization as well as the other companies involved,” he continued. “I feel the merger into Hitachi Automotive Systems will give the new company more buying power and a much larger footprint in the automotive supplier markets.
“We are still unsure of the overall timeline,” said Shirling, “other than what is in the press releases. We know there will be no name change until at least the fall of 2020.”
Other mergers
In late 2019, the Wall Street Journal reported that Fiat Chrysler Automobiles NV and French carmaker PSA Group are exploring a combination.
Additionally, Toyota Motor Corp. recently agreed to boost its stake in Subaru Corp., while establishing ties with smaller rivals such as Suzuki Motor Corp. and Mazda Motor Corp.
The smaller companies have acknowledged that they lack the investment firepower to invest in developing new vehicle technologies.