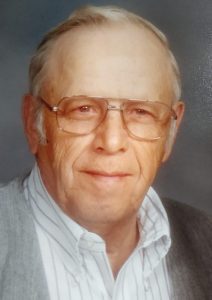 Jack Hebert, age 92, of Dryden, MI died Friday, January 10, 2020 at his home. Harold E. Hebert was born February 28, 1927 in Battle Creek, MI. He was the son of the late Henry and the late Lillian (Thompson) Hebert. The family moved to Dryden when he was quite young. Jack was a lifelong resident of Dryden, MI and he was a graduate of the Dryden High School Class of 1945. He married Dolores Una Davis on May 13, 1960 in Flint, MI. They have been together for 59 years.
Jack joined the U. S. Navy in March 1945 and honorably served on the USS Tillman (DD-641) as a Fireman First Class in the South Pacific Theatre of Operations. He served in the Navy during World War II from March 26, 1945 to July 17, 1946. He received the American Area Campaign Medal, Asiatic-Pacific Campaign Medal, and the World War II Victory Medal.
Jack was a machinist at National Twist Drill in Rochester for 20-plus years until they closed in the early 1980s. Jack had studied as a watch and clock repairman; he worked as a watch and clock repairman for over 60 years for himself and for MacDonald’s Jewelers in Imlay City and Polk Jewelers in Lapeer. His watch and clock repair business was well known around the countryside. Jack was a member of the Dryden United Methodist Church and the Dryden Vets. He was the oldest surviving WWII veteran in the Dryden area.
He is survived by his wife of 59 years, Dolores Hebert of Dryden, MI; and two sons, Rob (Susie) Trott of Columbiaville, MI and Michael (Diane) Hebert of Greenville, MI. He is also survived by grandchildren, Christina, Kimmy, Ryan, Dakota, Scott, Danielle, Andrea, Adam, Stephanie and Candee; and by several great-grandchildren and great-great-grandchildren.
He was preceded in death by his parents; daughter, Lorelei Belle Trott (2019); brothers, Ralph (his twin) Hebert, Albert Hebert and Charles Hebert; and sisters, Lottie Harris, Elizabeth Miller, Marie Collins, May Polfliet and Frances Townsend.
The funeral services were held on Tuesday, January 14 at Muir Brothers Funeral Home of Imlay City, 225 N. Main Street, Imlay City, MI. Reverend William Onan (former pastor of the Dryden Wesleyan Church) officiated. Burial followed in Mt. Pleasant Cemetery, Dryden where a military salute was held.
Those wishing to make memorial contributions may direct them to Grace Hospice, 4444 W. Bristol Rd., Suite 320, Flint, MI 48407.
Please be sure to sign the online register book at muirbrothersfh.com to share your condolences and memories with the family.