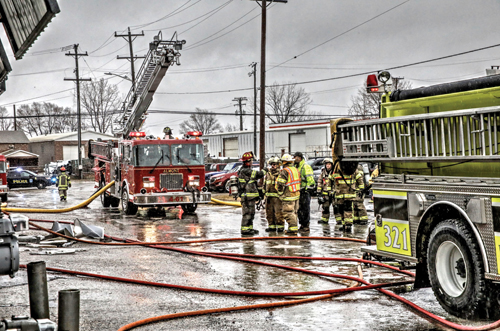 The fire originated in the building’s service area and firefighters were able to extinguish it quickly. Photo by Stu Davis

to reports of heavy smoke at JER Equip.

IMLAY CITY — At around 12:47 p.m. on Saturday, Jan. 11, Imlay City and Attica firefighters responded to reports of smoke at the JER Equipment company at 379 Second Street, west of Van Dyke (M-53).
Upon arrival at the scene, firefighters found heavy black smoke emanating from the roll-up doors at the front of the building.
Asst. Fire Chief Matt Makedonsky said fire crews were quickly able to enter through the front door and discovered the origin of the fire in the building’s service area.
“The interior crew made a very quick ‘knock down’ with minimum damage to the building,” said Makedonsky. “This could have been a lot worse.”
Although the origin of the fire has been determined, Fire Chief Rick Horton said the “source of ignition” remains under investigation.
Others responding to the fire and providing mutual aid were Almont, Attica and Goodland township firefighters, along with Lapeer County EMS personnel.
Horton added that Imlay City Police and Lapeer County Sheriff’s deputies assisted at the scene by closing down the section of Second Street, between Almont Avenue and Van Dyke (M-53).