Dryden falls to Kingston at buzzer 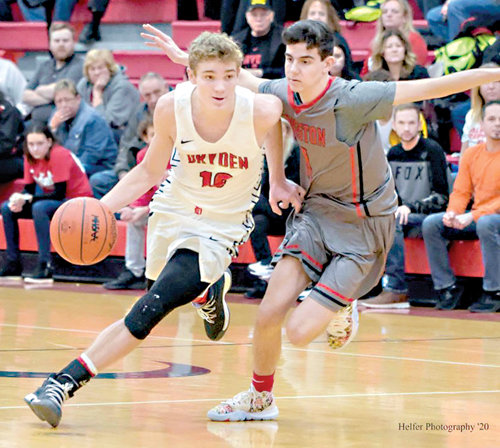 DRYDEN — The Dryden varsity boys’ basketball team gave visiting Kingston all it could handle and then some, before falling by a narrow 52-51 count in a North Central Thumb League showdown last Friday night.
With the outcome, Kingston moves to 6-0 and 3-0. Dryden slips to 3-3 and 0-2.
“It was great high school basketball game between two very good teams,” Dryden Coach John DelCampo stated. “Give Kingston credit, they played well and Aaron Koehler hit a huge shot for them (a three-pointer at the buzzer for the win),” he noted.
“We had our chances but we did not execute down the stretch We only shot 50 percent from the foul-line and that really hurt us.”
In Friday’s clash, Dryden grabbed a 15-14 edge after one quarter was done.
The middle two quarters saw Kingston net 27 total points and Dryden generate 24, leaving them ahead 41-39 with 24 minutes gone.
Dryden then put together a 12-11 fourth quarter rally, only to drop a narrow 52-51 verdict at night’s end.
Jack Kaplan led Dryden with 19 points. He was given assistance in the scoring department by Josh Schornak and Nate Schenkel (eight points apiece), Ethan Ledford (seven), Coulter Waite (six) and Ronny Hudson (three).