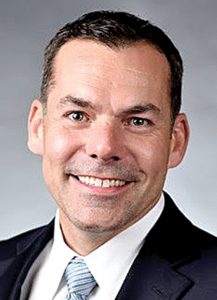 ALMONT — All indicators suggest that the Village of Almont and its periphery, including the downtown district and potentially the industrial park, could be slated for growth in the coming years.

With his eye on both the present and future, Village Manager Mike Connors considers it a priority that the village’s infrastructure and services be sufficient and made ready to accommodate such growth when it occurs.

Connors expressed those opinions at a Nov. 21 joint meeting of Almont village and township officials who were assembled to hear plans for a new housing and retail development at the northeast corner of M-53 (Van Dyke) and Hough Rd.

The development, proposed by Dan and Roger Walker and owners of Blake’s Orchards and Cider Mill, could include as many as 200 homes, along with retail spaces and possibly a health facility.

The feasibility of such a project would depend on the Village of Almont providing water and sewer services to the location, which is situated just south of the village limits in Almont Township.

At the Nov. 21 meeting, Connors expressed some concern that the village’s wastewater treatment plant could accommodate the increased demand placed on existing systems.

“I won’t address the utility extension now, since it’s driven by a developer and not the village,” Connors pointed out. “So that is a pending project and subject to agreement of cost undertaking by the developer. We should know more in the coming weeks.”

While he remains cautiously optimistic about potential growth, Connors discussed some of the upcoming projects and steps to be taken in 2020 in preparation for future needs.

“For 2020, the village will have just wrapped up multiple zoning amendments that play, in part, to Redevelopment Ready Community (RRC) best practices,” Connors said.

He added that another piece to the RRC program is developing a Capital Improvement Plan (CIP) for the village.

“In February the Almont Planning Commission will be reviewing a five-year capital improvement plan, which will serve as our project priority list and financial commitment schedule moving forward.”

Connors did note some projects that are expected to take place in 2020. They include:

•A new salt shed building for the Department of Public Works.
•Water distribution pipe replacement at Hamilton Avenue; with Almont Avenue to be completed during the following year.
•New home construction sites at the K-Lynn Subdivision. Construction has already begun on 22 new single-family homes on 11.25-acres near the intersection of June Drive and Dawn Drive. The property is being developed by Jim Novak.
•Also coming this year is the construction of four new condominium units at St Clair St. and Jonathon St.

Connors added that subject to arranging scheduling with the Lapeer Drain Office, there is the possibility that drainage improvements will take place at the former Stroup development this year.