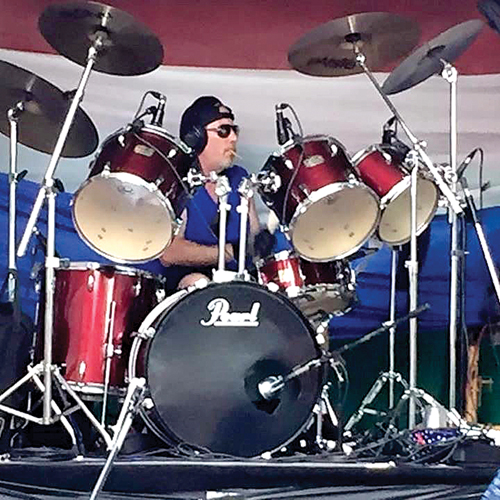 While Gary Peltier loved working on behalf of the Village of Almont and Almont Park Board, he was possibly happiest when sitting behind a set of drums.

ALMONT — The community of Almont has lost a devoted public servant with the passing of Gary D. Peltier at his home Sunday, Dec. 29.

Peltier, 61, had been a long-serving Almont Village Council member, having been appointed to a vacant seat on Oct. 19, 2010.

He also served on the Village’s Zoning Board and was Chairman of the Almont Park Board.

Through his participation on various boards, Peltier arranged entertainment for the Almont Park Board’s “Summer Concerts in the Park” series, while spearheading the creation of a community ice rink in January of 2013. He also played an integral role in Almont Community Park being awarded a Michigan DNR Recreation Passport Grant for park upgrades and funding for major revisions to the park pavilion’s restroom and kitchen areas in 2016.

Among the people Peltier worked with on behalf of the Village of Almont and Almont Park Board was Almont Township Treasurer, Roberta Kudsin, who valued his many contributions.

“It was my privilege to work with Gary as the recording secretary and Township representative on the park board since 2013,” said Kudsin. “I found him to be a very caring and kind person who always went way beyond expectations. “His love for our community showed in all aspects of his involvement,” she continued. “His taking care of the community park entailed setting up the bands and sponsors for concerts in the park; installation, maintenance and removal of the ice rink; cleaning the pavilion for the many renters throughout the year; making sure the maintenance and security at the park itself was taken care of; and planning the updating of recreational equipment.

“The Almont Park Board’s next chairman is going to have some big shoes to fill. Gary will be truly missed — and especially by me.”

Village Council President Steven A. Schneider also alluded to Peltier’s deep devotion for the Almont community and its residents.

“Almont was in his blood,” said Schneider. “Despite health issues, he was totally committed to Almont.

“It is not just his wife, Arlene, and Gary’s family who have suffered this loss — but the entire community.

“Gary gave all he had as an Almont Village Council and Planning Commission member and as Chairman of the Park Board, which was a non-entity before Gary took over.

“He was very down to earth, with no airs about him. He just wanted to serve. And he had no hate in his heart, just love.

“Moreover, he had principles, which he was always willing to stand up for,” Schneider continued. “He was brave and courageous and was willing to take a position; even if it was controversial, unpopular and if he knew people were going to yell into his face and swear at him (which happened). “Gary always voted for what he believed was best for the citizens of Almont,” Schneider said. “We are going to miss him terribly.”

Born in Detroit on July 29, 1958, Peltier was the son of Gary J. and Sandra R. (Brady) Peltier.
He graduated from Warren Mott High School and married Arlene Plonka on October 14, 2005 in Lapeer.
The couple worked in food service at Ford Motor Company. He was also a member of the Elks Club.
An accomplished musician, Peltier enjoyed playing drums from his very first lesson at the age of 10.
Over the years, he played in various Detroit-area bands, including Defiance and The Toonz.

Some mourners commented on how touching it was to see Gary with a pair his favorite Promark 5-B drum sticks in his hands at his viewing.

He was preceded in death by his parents.